What is Bordetella pertussis?

Bordetella pertussis is a pathogenic Gram-negative aerobic bacterium that is the causative agent of the disease pertussis or whooping cough. 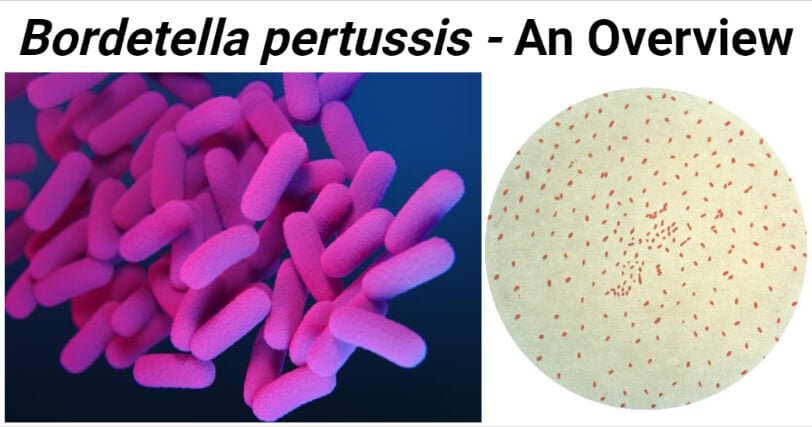 The following is the taxonomical classification of B. pertussis;

The following are some cultural characteristics of B. pertussis on different culture media:

The biochemical characteristics of B. pertussis can be tabulated as follows:

Bordetella pertussis is an obligate pathogen that has adapted to the environments in the human body by means of various virulence-related factors. These factors include structures, products as well as genes that regulate the progression of disease in the host. It produces an array of toxins and adhesins that are important in the colonization of hosts while protecting them against the host immune system.

The following are the common virulence factors associated with infections caused by B. pertussis and its pathogenesis;

Figure: Effects of PT on immune cells and responses and on other aspects of pertussis pathogenesis. Image Source: MDPI Toxins. 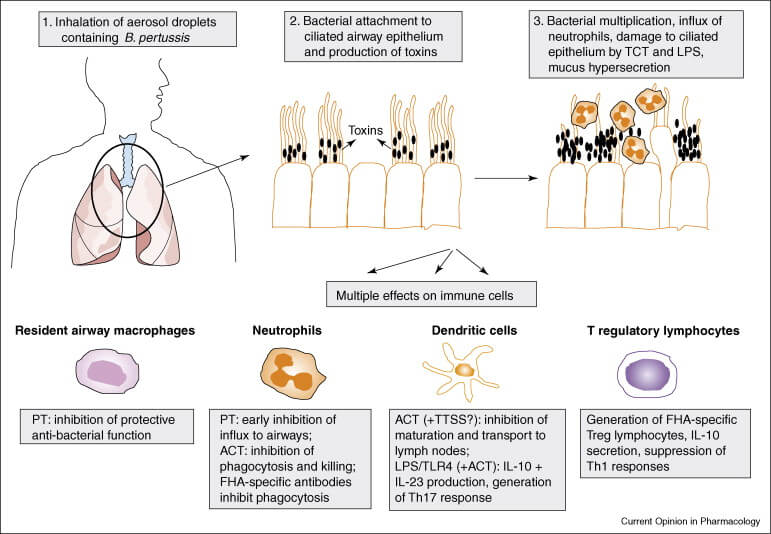 Figure: Summary of infection of the respiratory tract by B. pertussis and its immunomodulatory effects. Image Source: https://doi.org/10.1016/j.coph.2006.12.004.

The overall pathogenesis of B. pertussis can be described in the following steps;

a. Entry and Colonization

The diagnosis of pertussis is difficult as the symptoms of the disease are similar to other mild infections like common cough or cough. The most important and useful markers that can be used as indicators of the disease are a mild increase in the leukocyte count and marked lymphocytosis. The clinical definition of the disease requires one or more typical symptoms that include inspiratory whoop and paroxysmal cough for about a week. Diagnosis of pertussis can be obtained either through the traditional method of culture and serological testing or by the use of genomic analysis to identify the organism accurately.

b. Microscopic, Cultural and Biochemical characteristics

2 thoughts on “Bordetella pertussis- An Overview”