What is Blood Agar?

Blood Agar is an enriched medium provided with multiple nutrients that generally comes as a basal media for the preparation of blood agar by supplementation with blood.

Blood agar, like most other nutritional media, has one or more protein sources, salt, and beef extract for vitamins and minerals. Besides these components, 5% defibrinated mammalian blood is also added to the medium. The blood agar base is commercially sold by various vendors, or it can also be prepared in the laboratory if the necessary ingredients are available. The exact composition of the blood agar base is given below:

Hemolysis is the lysis of red blood cells in the blood due to the extracellular enzymes produced by certain bacterial species. The extracellular enzymes produced by these bacteria are called hemolysins which radially diffuse outwards from the colonies, causing complete or partial lysis of the red blood cells. Four different types of hemolysis are observed on blood agar which can each be identified by a zone of hemolysis present around the growing colonies. 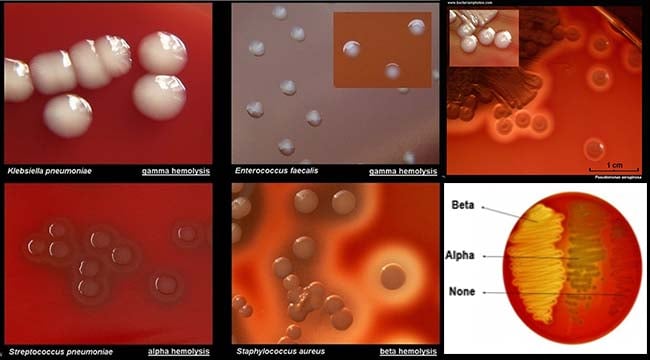 The basal medium appears light amber colored which might look clear to slightly opalescent gel. After the addition of 5%, v/v sterile defibrinated blood; however, the cherry red-colored opaque gel is formed on the Petri plates. The following table demonstrates the growth of important medical bacteria with their colony morphologies on Blood Agar Medium: