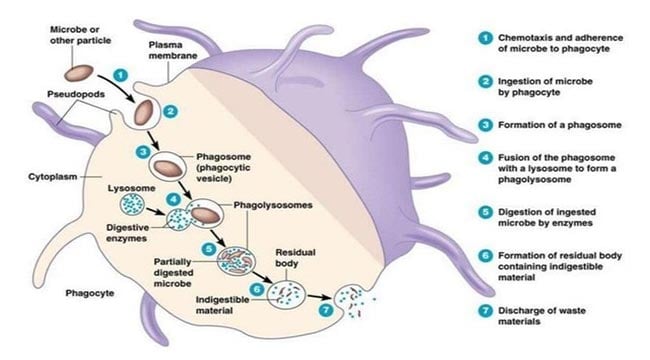 Destruction of the Microbes

The following are important factors that help destroy microorganisms within a phagolysosome:

Oxygen Radicals: A complex of proteins called phagocyte oxidase in the membrane of a phagolysosome generates oxygen radicals in the phagosome. A single electron is taken from NADPH and added to oxygen, partially reducing it. The resulting highly reactive molecules react with proteins, lipids and other biological molecules.
Nitric Oxide: Nitric oxide synthase synthesizes nitric oxide, a reactive substance that reacts with superoxide to create further molecules that damage various biological molecules.
Anti-Microbial Proteins: Lysosomes contain several proteases, including a broad spectrum enzyme, elastase, which is important or even essential for killing various bacteria. Another anti-microbial protein is lysozyme, which attacks the cell walls of certain (gram-positive) bacteria.
Anti-Microbial Peptides: Defensins and certain other peptides attack bacterial cell membranes. Similar molecules are found throughout much of the animal kingdom.
Binding Proteins: Lactoferrin binds iron ions, which are necessary for the growth of bacteria. Another protein binds vitamin B12.
Hydrogen Ion Transport: Transporters for hydrogen ions (a second role of the oxidase) acidify the phagolysosome, which kills various microorganisms and is important for the action of the proteases described above.

In addition to destroying the microorganism, phagocytes also release molecules that diffuse to other cells and help coordinate the overall response to an infection.

Regulatory molecules that regulate an immune response are called cytokines. Most are small proteins and are mainly released by white blood cells and their relatives, such as macrophages.

Several types of cells in the immune system engulf microorganisms via phagocytosis.

Neutrophils: Neutrophils are abundant in the blood, quickly enter tissues, and phagocytize pathogens in acute inflammation.
Macrophages: Macrophages are closely related to monocytes in the blood. These longer-lived cells predominate in chronic inflammation. They also release some important inflammatory paracrine.
Dendritic Cells: Phagocytosis in these cells is important for the elaboration of a specific immune response rather than for directly destroying the pathogens.
B Lymphocytes: A small amount of phagocytosis in these cells is often necessary in order for them to develop into cells that release antibodies.

Steps in the phagocytosis of a bacterium