The Triple Sugar Iron agar (TSIA) test is designed to differentiate among the different groups or genera of the Enterobacteriaceae, which are all gram-negative bacilli capable of fermenting glucose with the production of acid and to distinguish them from other gram-negative intestinal bacilli. The differentiation is based on fermentation of glucose and lactose or sucrose and hydrogen sulfide (H2S) production. TSIA medium contains 10 parts of lactose: 10 parts of sucrose: 1 part of glucose and peptone. Phenol red and ferrous sulfate serve as indicators of acidification and H2S formation, respectively. The acid-base indicator phenol red incorporated for detecting carbohydrate fermentation is indicated by the change in color of the carbohydrate medium from orange-red to yellow in the presence of acids.  In the case of oxidative decarboxylation of peptone, alkaline products are built and the pH rises. This is indicated by the change in color of the medium from orange-red to deep red. Sodium thiosulfate and ferrous ammonium sulfate present in the medium detect the production of hydrogen sulfide and are indicated by the black color in the butt of the tube.

Glucose is utilized first by a fermentative organism and the entire medium becomes acidic (yellow) in 8 to 12 hours. The butt remains acidic even after an 18 to 24 hours incubation period because of the presence of organic acids resulting from the fermentation of glucose under anaerobic conditions in the butt of the tube.  The slant, however, reverts to the alkaline (red) state because of oxidation of the fermentation products under aerobic conditions on the slant. This change is a result of the formation of CO2 and H2O and the oxidation of peptones in the medium to alkaline amines. When, in addition to glucose, lactose, and/or sucrose are fermented, the large amount of fermentation products formed on the slant neutralizes the alkaline amines and renders the slant acidic (yellow), provided the reaction is read in 18 to 24 hours. If the slant and butt become alkaline, glucose has not been fermented. Organisms showing this reaction are defined as non-fermenters and derive their nutrients from the peptones present in the medium. The formation of CO2 and hydrogen gas (H2) is indicated by the presence of bubbles or cracks in the agar or by the separation of the agar from the sides or bottom of the tube. The production of H2S (sodium thiosulfate reduced to H2S) requires an acidic environment, and reaction with the ferric ammonium citrate produces a blackening of the agar butt in the tube. 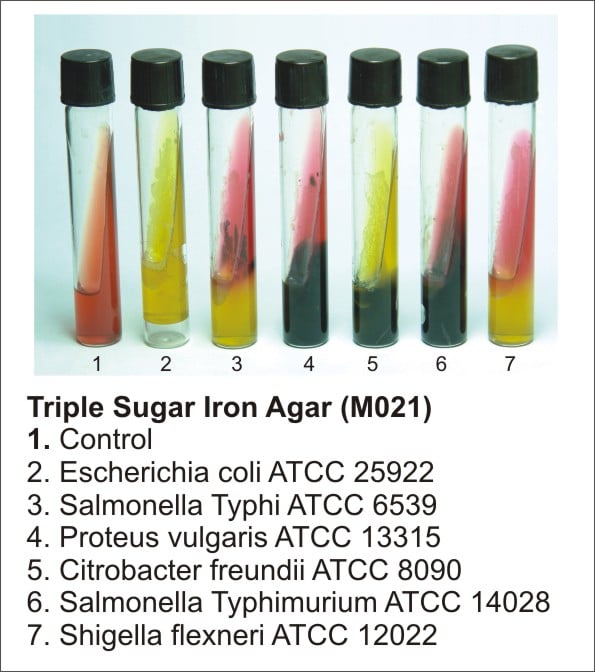