Millon’s test is an analytical test used for the detection of the amino acid tyrosine, which is the only amino acid containing the phenol group. Millon’s test is a specific test for tyrosine, but it is not a specific test for protein as it also detects the phenolic group present in other compounds as well. Therefore, while performing Millon’s test, it is essential that other tests like the Biuret test and Ninhydrin test also be performed. As many proteins consist of tyrosine, the test is useful in the detection of such proteins. The test was discovered by and named after the French Chemist Auguste Nicolas Eugene Millon.

Millon’s test is based on the principle of nitrification of the phenol group in tyrosine, which then forms complexes with heavy metals like mercury. The reagent used for the test is called Millon’s reagent, and it consists of mercuric nitrate and mercurous nitrate that is dissolved in concentrated nitric acid. In the test, the phenol group on the tyrosine molecule is nitrated by the nitric acid present in the reagent. The nitrated tyrosine then combines with the mercury ions in the solution to form a red-colored precipitate or solution. In some proteins containing tyrosine, the initial reaction between mercuric nitrate results in a white or yellow colored precipitate. After the addition of nitric acid and heating, however, the residue turns red in color. Both of these results are considered positive results and indicate the presence of tyrosine in the solution.

Preparation of Millon’s reagent: Dissolve 160 grams of mercuric nitrate and 160 grams of mercurous nitrate in 400 ml concentrate nitric acid solution. The reagent is then made to 1000 ml by the addition of 600ml distilled water. The formula can be adjusted to suit the performance parameters.

Result and Interpretation of Millon’s Test 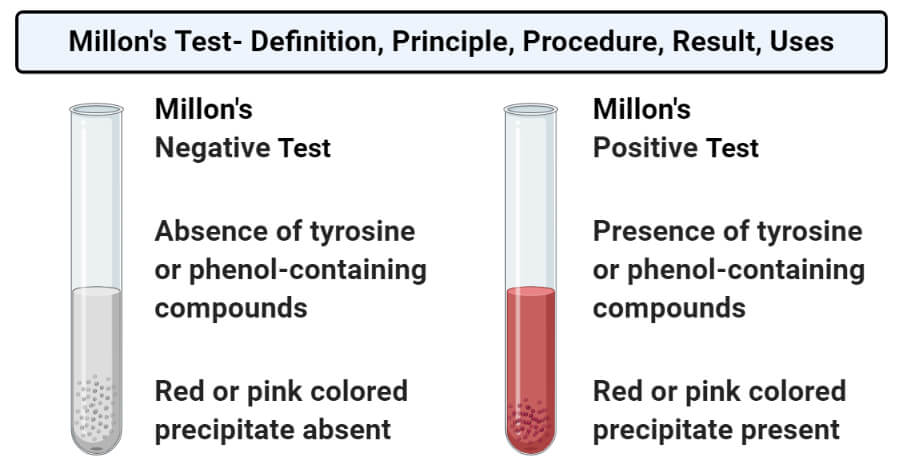