Four levels of hierarchy in protein conformation can be described.

SECONDARY STRUCTURE is the arrangement of hydrogen bonds between the peptide
nitrogens and the peptide carbonyl oxygens of different amino acid residues. 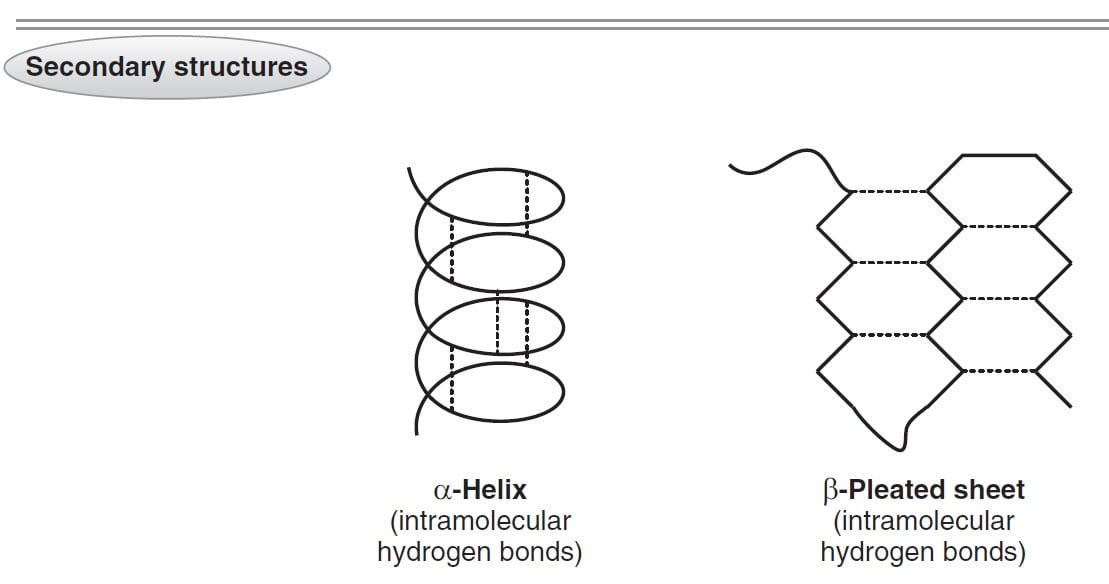 1. In helical coils, the hydrogen-bonded nitrogens and oxygens are on nearby amino
acid residues.

a. The most common helical coil is a right-handed α-helix.
b. α-keratin from hair and nails is an α-helical protein.
c. Myoglobin has several α-helical regions.
d. Proline, glycine, and asparagine are seldom found in α-helices; they are “helix breakers.”

a. The hydrogen bonds may be on different chains or distant regions of the same chain.
b. The strands may run parallel or antiparallel.
c. Fibroin in silk is a β-sheet protein.

TERTIARY STRUCTURE refers to the three-dimensional arrangement of a polypeptide chain that has assumed its secondary structure. Disulfide bonds between cysteine residues may stabilize tertiary structure. 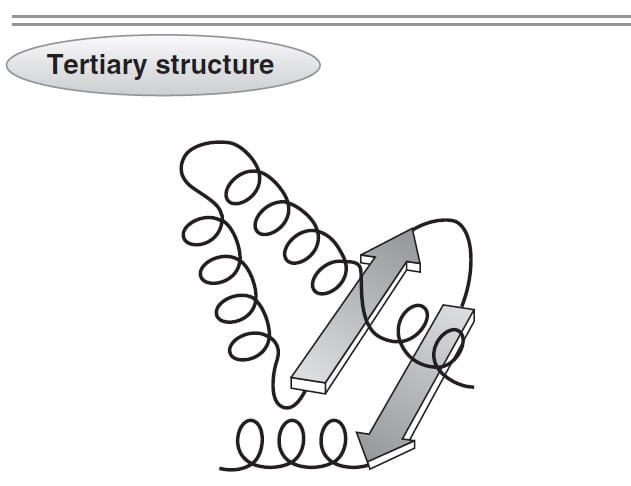 QUATERNARY STRUCTURE is the arrangement of the subunits of a protein that has more than one polypeptide chain.

LEFT-HANDED HELICAL STRANDS are wound into a supercoiled triple helix in collagen. The major structural protein in the body, collagen makes up 25% of all vertebrate protein.

a. The primary structure of collagen includes long stretches of the repeating sequence glycine-X-Y, where X and Y are frequently proline or lysine. The high proportion of proline residues leads to formation of the left-handed helical strands.

b. Only glycine has an R-group small enough to fit into the interior of the righthanded triple helix.

c. Collagen also contains hydroxyproline and hydroxylysine. The hydroxyl groups are added to proline and lysine residues by post-translational modification.