Immune responses that are the cause of hypersensitivity diseases may be specific for antigens from different
sources:

Hypersensitivity diseases are commonly classified according to the type of immune response and the effector
mechanism responsible for cell and tissue injury. These mechanisms include some that are predominantly dependent on antibodies and others predominantly dependent on T cells, although a role for both humoral and cell-mediated immunity is often found in many hypersensitivity diseases.

It is caused by IgE antibodies specific for environmental antigens and is the most prevalent type of hypersensitivity disease. Immediate hypersensitivity diseases, commonly grouped under allergy or atopy, are often caused by activation of interleukin-4 (IL-4), IL-5, and IL-13 producing Th2 cells and the production of IgE antibodies, which activate mast cells and eosinophils and induce inflammation.

IgG and IgM antibodies specific for cell surface or extracellular matrix antigens can cause tissue injury by activating the complement system, by recruiting inflammatory cells, and by interfering with normal cellular functions.

IgM and IgG antibodies specific for soluble antigens in the blood form complexes with the antigens, and the immune complexes may deposit in blood vessel walls in various tissues, causing inflammation, thrombosis, and tissue injury.

In these disorders, tissue injury may be due to T lymphocytes that induce inflammation or directly kill target cells. In most of these diseases, the major mechanism involves the activation of CD4+ helper T cells, which secrete cytokines that promote inflammation and activate leukocytes, mainly neutrophils and macrophages. CTLs contribute to tissue injury in some diseases.

Some antigens (allergens), such as insect venom, foods, pollen, and dust mite, can induce the formation of IgE antibodies in individuals with a corresponding predisposition. The IgE antibodies bind via Fc receptors to mast cells (sensitization). If the individual is re-exposed to the allergen, cross-linkage of the membrane-bound IgE occurs. This results in the immediate release of mediators (e.g., histamine, kininogen), which induce vasodilation, smooth-muscle contraction, mucus secretion, edema, and/or skin blisters. Most allergens are small proteins that can easily diffuse through the skin or mucosa. They are frequently proteases and are active at very low doses. IL-4 favors differentiation of TH2 cells. The  exact mechanism that leads B cells to produce IgE is not known. 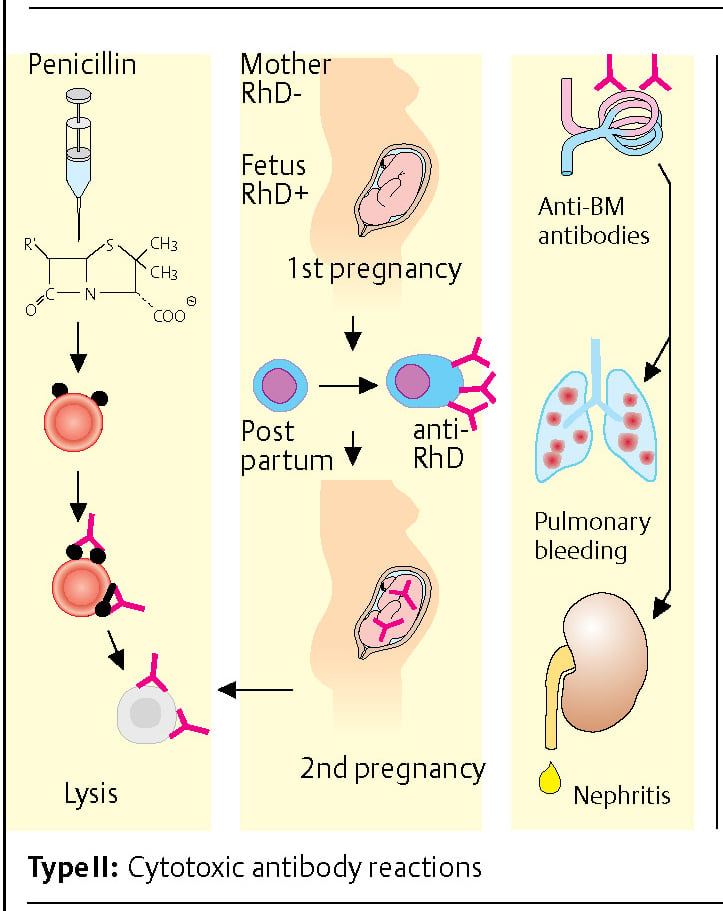 The immunization of individuals to erythrocyte antigens during pregnancy is a typical example of a type II reaction. Children who inherit the RhD erythrocyte antigen from their father can induce immunization against the RhD+ antigen in their RhD-mother. Sensitization usually occurs at birth when fetal blood cells come into contact with the maternal immune system. In any subsequent pregnancies, maternal anti-RhD antibodies of the IgG type can pass into the placenta and cause severe hemolysis of fetal RhD+ erythrocytes.
Other examples: Drugs (e.g., penicillin) can passively bind to erythrocytes. Antibodies directed against penicillin then lead to lysis of the erythrocytes. The formation of antibodies directed against the basement membrane (BM) of the glomerulus can develop during the course of kidney inflammation. Lung damage accompanied by pulmonary hemorrhage and renal inflammation (glomerulonephritis) may occur due to cross-reaction of these antibodies with the basement membrane of the lung (Good-pasture’s syndrome). 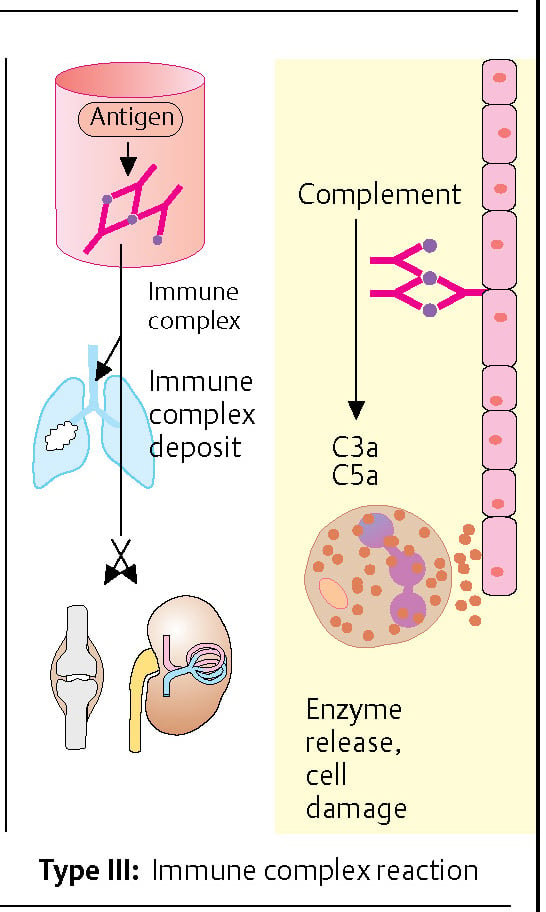 Antibody-antigen complexes (immune complexes) can form during an immune response. Immune complexes can settle in vessel walls, the basement membrane of the lungs and/or kidneys, and in the joints (synovia). They can induce inflammatory processes in these structures by binding complement factors C3a and C5a (anaphylatoxins). A particular type III reaction is the Arthus reaction: when an antigen has penetrated the skin of an individual who has preformed IgG antibodies, the immune complexes can bind to Fc receptors of most cells inducing degranulation inflammatory cells are recruited and complement is activated, leading to the release of C5a and local inflammation, platelet accumulation, and eventually to blood vessel occlusion with necrosis.

Haptens are molecules of very small molecular weight (often < 1 kDa). They are too small to function as antigens, but they can penetrate the epidermis and bind to certain proteins in the skin (carrier proteins). Hapten-carrier complexes are bound by antigen-presenting cells of the skin (Langerhans cells), which then migrate to regional lymph nodes. T-cell stimulation then occurs at the lymph node. The so-called sensitization phase lasts ca. 10-14 days. If the individual is reexposed to the hapten, antigen-specific T cells migrate to the skin, where they accumulate and proliferate. They also cause edema formation and local inflammation with the help of cytokines. Compounds containing nickel or chrome and chemicals such as those found in rubber are typical triggers of type IV hypersensitivity reactions.