What is Streptococcus anginosus?

Streptococcus anginosus is a Gram-positive bacterium that is present in the mouth, upper respiratory tract, gastrointestinal tract, and vagina as a normal inhabitant.

The following is the taxonomical classification of S. anginosus: 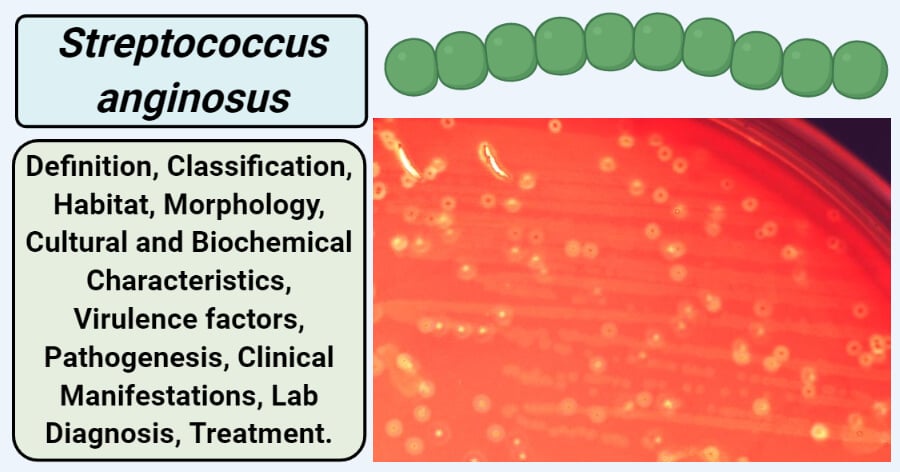 The biochemical characteristics of S. anginosus can be tabulated as follows:

Even though S. anginosus is present as a commensal in the human body, an increasing number of reports have been published emphasizing the role of S. anginosus as important bacterial pathogens. Traditionally, S. anginosus was overlooked as a pathogen as it was mistaken as commensal contamination, especially in diagnostic samples of polymicrobial infections. Different structures and proteins produced by the organism help in the colonization and invasion of the host body surface, which aids in the pathogenesis of the disease. Some of the well-studied virulence factors involved in disease production by S. anginosus are:

Traditionally, S. anginosus has been considered non-pathogenic, but new studies have indicated that S. anginosus is involved in various infections throughout various parts of the body. The exact mechanism of infection is not yet clearly understood but the involvement of some structures and proteins that are homologous to that found in other pathogenic Streptococcal species.

The diagnosis of infections caused by S. anginosus begins with the collection of samples, which depends on the site of infection and its extent. The sample can either be observed directly under the microscope or in other cases, cultured to obtain viable colonies of the organism for further diagnosis. The diagnosis of diseases caused by S. anginosus is mostly involved with the identification of the organism.

2 thoughts on “Streptococcus anginosus- An Overview”