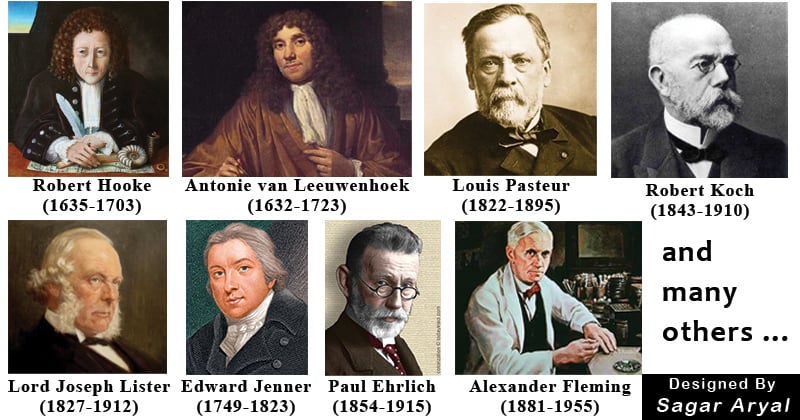 Louis Pasteur is also known as the father of microbiology. He has many contributions to microbiology:

Robert Koch provided remarkable contributions to the field of microbiology:

An additional fifth criterion was introduced subsequently which states that antibody to the causative organism should be demonstrable in the patient’s serum.

Exceptions to Koch’s postulates: It is observed that it is not always possible to apply these postulates to study all the human diseases.

There are some bacteria that do not satisfy all the four criteria of Koch’s postulates. Those organisms are:
• Mycobacterium leprae and Treponema pallidum: They cannot be grown in vitro; however can be maintained in animals.
• Neisseria gonorrhoeae: There is no animal model; however, bacteria can be grown in vitro.

Other Important Contributors in Microbiology

1. Antonie Philips van Leeuwenhoek: Discovered single-lens microscope and named organisms as ‘Little animalcules’.
2. Edward Jenner: Developed the first vaccine of the world, the smallpox vaccine by using cowpox virus.
3. Joseph Lister: He is considered to be the father of antiseptic surgery. He used carbolic acid during surgery.
4. Hans Christian Gram: He developed ‘Gram stain’.
5. Ernst Ruska: He was the founder of the electron microscope.
6. Alexander Fleming: He discovered the antibiotic penicillin.
7. Elie Metchnikoff: He described phagocytosis and termed phagocytes.
8. Kleinberger: He described the existence of L forms of bacteria.
9. Barbara McClintock: She described transposons.
10. Walter Gilbert and Frederick Sanger: were the first to develop (1977) the method of DNA sequencing.
11. Karry B Mullis: Discovered polymerase chain reaction (PCR).