Heller’s test is a biochemical test performed to detect proteins in a sample by the denaturation of those proteins by the addition of strong acids. Heller’s test usually uses concentrated nitric acid for the denaturation of proteins. The test is performed for clinical purposes to detect abnormal proteins in biological fluids, including urine. Heller’s test is a type of precipitation test where the precipitation is brought about by denaturation. The test was discovered and named after the Austrian Chemist, Johann Florian Heller while studying the biochemical nature of urine. The most common proteins that are detected by Heller’s test in urine include albumin and globulin. The test is clinically important as it is simple and requires a minimum reagent. It also detects proteins in biological fluids that represent the pathological features of certain diseases, thus helping in disease diagnosis.

The test is based on the principle of precipitation of proteins, which in this case takes place in the presence of mineral acids like nitric acid. Protein precipitation by acids relies on the changes in the pH of the solution. As all proteins have a defined isoelectric point or pI value, changes in the pH of the solution affect the structure of the protein. The addition of acids to a solution reduces its pH value. As the value decreases, protein molecules become positively charged due to the proton capture by amino groups present in the proteins. In an aqueous state, the hydration sphere that surrounds the protein becomes disrupted due to the charges. The disruption brings about an imbalance in the structure of the protein, resulting in precipitation. The addition of acid to a protein sample causes precipitation of proteins at the point where the acid comes in contact with the protein solution. As a result, a white coagulated ring is formed between the two layers of protein solution and the mineral acid (HNO3).

Result and Interpretation of Heller’s Test 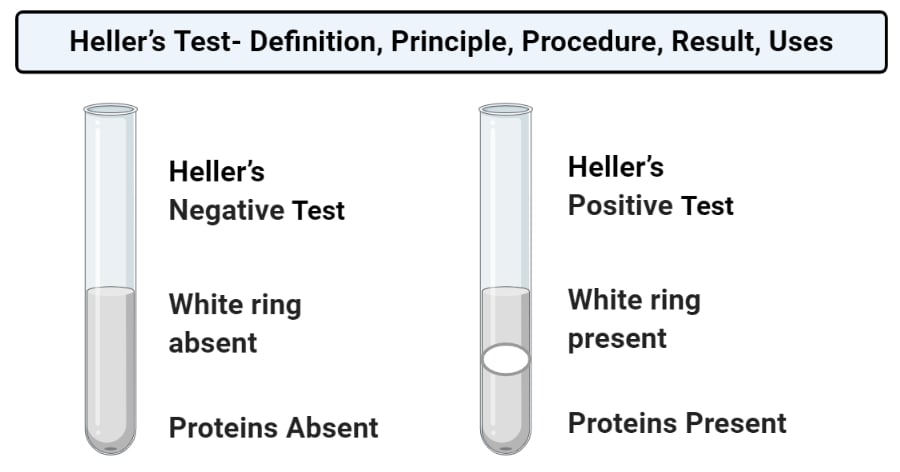