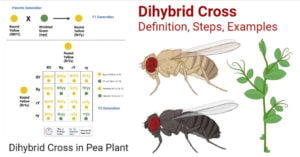 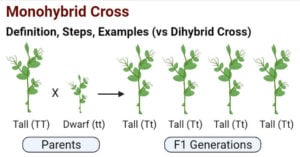 Monohybrid Cross Definition A Monohybrid cross is a type of genetic cross between two individuals with homozygous genotypes of a single character or trait, often resulting in an opposite phenotype. Monohybrid crosses are usually performed to determine the genotypes of offspring of homozygous individuals. The hybrid produced from this cross helps in the identification of the dominant genotype in the allele. Even though monohybrid crosses are often associated with homozygous genotypes, these are also used to determine the genetic mix … Read more 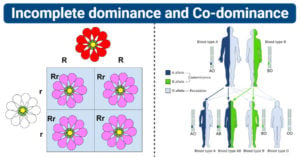 Sex makes no difference in Mendel’s crosses. But the Mendel’s laws are not applicable on those genes which are exclusively located either in X or Y chromosome. Sex-Linked Inheritance is the inheritance of a trait (phenotype) that is determined by a gene located on one of the sex chromosomes. The genes which occur exclusively on the X chromosome or on the analogous Z chromosome (in birds and other species) are called X- or Z -linked genes while the genes which … Read more

Though, the genes of nuclear chromosomes have a significant and key role in the inheritance of almost all traits from generations to generations, they altogether cannot be considered as the sole vehicles of inheritance. Certain experimental evidences suggest the occurrence of certain extranuclear genes or DNA molecules in the cytoplasm of many prokaryotic and eukaryotic cells. Bacterial cells such as E. coli possess a single main chromosome in the nucloid and often extra DNA elements called plasmids in the cytoplasm. … Read more

The Hardy–Weinberg principle, also known as the Hardy–Weinberg equilibrium, model, theorem, or law explains that allele and genotype frequencies in a population will remain constant from generation to generation in the absence of other evolutionary influences. The law was proposed by a British mathematician Hardy and a German physician Weinberg (1908) independently. Both the ideas together is called as the Hardy-Weinberg law equilibrium after their names. It states that both gene frequencies and genotype frequencies will remain constant from generation to generation in an infinitely … Read more

The genome of an organism encompasses all of the genes of that organism. Gene is a distinct sequence of nucleotides forming part of a chromosome, the order of which determines the order of monomers in a polypeptide or nucleic acid molecule. Thus a protein-coding gene is defined as a region of DNA that encodes a single polypeptide or a set of closely related polypeptides. Genes are contained in chromosomes. Chromosomes are thus structures within cells that contain hundreds to thousands … Read more