Salt Saturation Test is a test for the precipitation of proteins and their differentiation from other proteins by using the salting-out technique. Salting out is the process of precipitation of proteins by increasing the concentration of salt in the solution. The salts used in this technique are mostly neutral mineral salts like MgSO4, Na2SO4, and (NH)2SO4. The salt solubilization test also helps in the differentiation of proteins as some proteins precipitate under lower salt concentrations while others require higher concentrations. The reagent used for the test might differ depending on the preference with salts like ammonium sulfate being used due to their increased solubility. The salt saturation test can be performed either as half saturation or full saturation depending on the type of proteins being detected. In the half-saturation, the solution is just half saturated with the salt, but in full saturation, the solution is completely saturated with the salt.

Proteins are colloidal in nature due to the presence of a large number of electric charges which creates repulsion, preventing the coalescence of the particles. Similarly, a shell of hydration is also formed around each protein molecule where the proteins are surrounded by films of water molecules. The mechanism of the salting-out technique is the preferential solvation of salt molecules by the exclusion of the hydration layer around the protein molecules. When organic salts are added to the solution, the effective water concentration available for the proteins decreases which eventually leads to the precipitation of the proteins. There are two different mechanisms involved in the process. 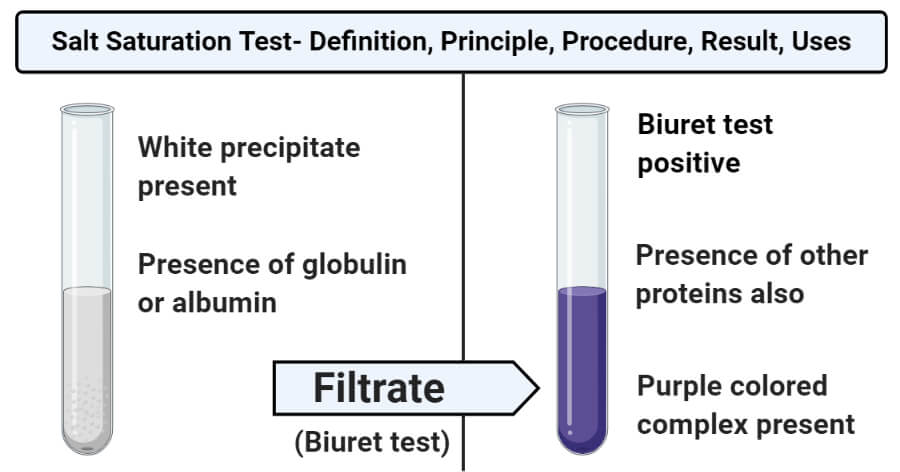