Sakaguchi test is a biochemical test consisting of colorimetric reaction for the detection and quantification of guanidinium groups, used as a qualitative test for arginine that is either free or in protein. The test was discovered by and named after the Japanese Food Scientist Shoyo Sakaguchi in 1925. Sakaguchi test is an example of color reactions or test that is performed for the detection of amino acids or proteins. The test is a specific test for arginine where the guanidinium group of arginine reacts with 1-naphthol or α-naphthol to produce a colored product. It is a qualitative test, and the quantification of arginine is hindered in this test due to the slow rate of color development and destruction of some guanidinium groups by the reagent.

Sakaguchi test is based on the principle of reaction between 1-naphthol and the guanidinium groups in arginine, in the presence of an oxidizing agent. The exact mechanism of the reaction is not yet known; however, the reaction results in the formation of a red-colored complex due to the formation of an indole-like structure. The Sakaguchi reagent consists of sodium hypobromite and 1-naphthol. The sodium hypobromite acts as an oxidizing agent that facilitates the hydrogen bonding between two arginine molecules.

Result and Interpretation of Sakaguchi Test 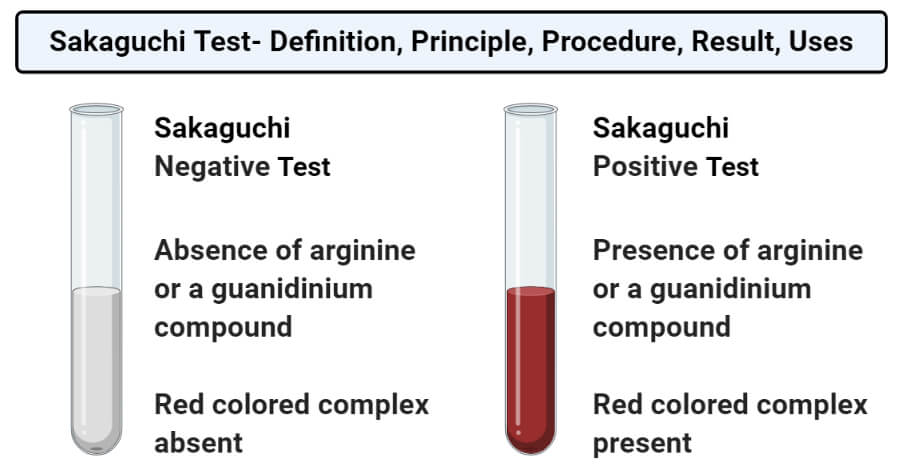