Potato dextrose agar is common microbiological basal growth media made from potato infusion, and dextrose used for the growth of the fungi. PDA is recommended by APHA and FDA for plate counts of yeasts and molds in the examination of foods and dairy products. It is a general purpose medium for yeasts and molds that can be supplemented with acid or antibiotics like Chloramphenicol, Tartaric Acid and Chlortetracycline can be added as selective agents and to inhibit bacterial growth. PDA can be used for growing clinically significant yeast and molds. PDA is also useful for maintaining stock cultures of certain dermatophytes.

Potato Dextrose Agar (PDA) contains dextrose as a carbohydrate source which serves as a growth stimulant and potato infusion that provides a nutrient base for luxuriant growth of most fungi.  Agar is added as the solidifying agent.  A specified amount of sterile tartaric acid (10%) may be incorporated to lower the pH of the medium to 3.5, so that bacterial growth is inhibited.

Yeasts will grow as creamy to white colonies.

Molds will grow as filamentous colonies of various colors. 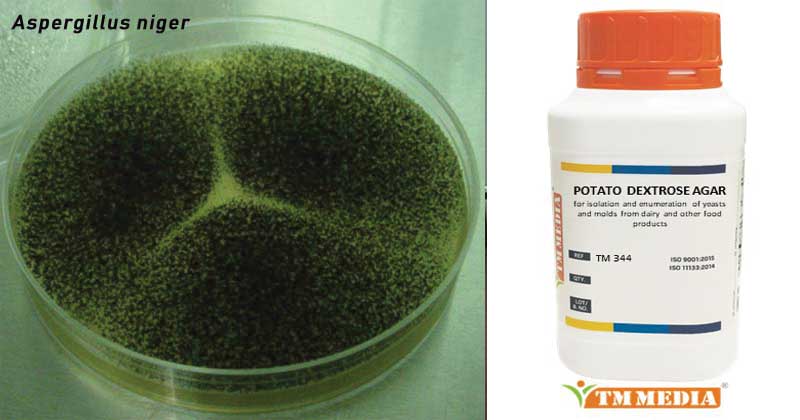 Colony morphology of some fungi on Potato Dextrose Agar