Complement refers to a set of serum proteins that cooperates with both the innate and the adaptive immune systems to eliminate blood and tissue pathogens. Various complement components bind and opsonize bacteria, rendering them susceptible to receptor-mediated phagocytosis by macrophages, which express membrane receptors for complement proteins. Other complement proteins elicit inflammatory responses, interface with components of the adaptive immune system, clear immune complexes from the serum, and/or eliminate apoptotic cells. Finally, a Membrane Attack Complex (MAC) assembled from complement proteins directly kills some pathogens by creating pores in microbial membranes. Paul Ehrlich coined the term complement, defining it as “the activity of blood serum that completes the action of antibody.” 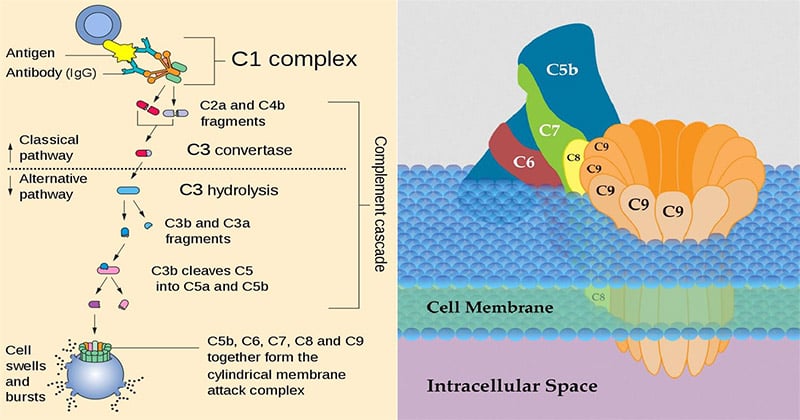 Complement is a complex system of enzymes, regulatory proteins, and cell surface receptors that are involved in host defense, inflammation, and modulation of immune responses. The system provides a fast-acting mechanism for the identification and removal of foreign substances, providing protection before the adaptive immune system can come into play. It is also involved in a wide variety of homeostatic processes including the clearance of immune complexes, effete cells, and cellular debris from damaged tissues.

The complement system is a part of the immune system that enhances (complements) the ability of antibodies and phagocytic cells to clear microbes and damaged cells from an organism, promotes inflammation, and attacks the pathogen’s plasma membrane.

The complement system consists of serum and cell surface proteins that interact with one another and with other molecules of the immune system in a highly regulated manner to generate products that function to eliminate microbes. Complement proteins are plasma proteins that are normally inactive; they are activated only under particular conditions to generate products that mediate various effector functions of complement.

There are four main effects of complement: