Pauly’s test is a biochemical test for the detection of tyrosine and histidine where the reagent couples with amines, phenols, and imidazole groups. The test was discovered by and is named after the German Chemist Hermann Pauly. Pauly’s test is a specific test for proteins containing tyrosine and histidine as the reagent undergoes diazotization with aromatic groups. The reaction is performed under cold conditions as the diazonium compound can only form at cold temperatures. The test is a specific test for proteins, which is performed for further differentiation between amino acids and proteins.

Pauly’s test is based on the principle of coupling between the amino acids and the diazonium ion formed in the reagent. The pauly’s reagent consists of sulphanilic acid dissolved in concentrated hydrochloric acid. The sulfanilic acid undergoes diazotization in the presence of sodium nitrate and hydrochloric acid. The result of the diazotization reaction is the diazonium salt (p-phenyldiazosulphonate). The diazonium salt thus formed couples with histidine molecule in an alkaline condition to form a dark red or cherry colored compound. The color might decrease in intensity and changes into an orange color when the solution is made acidic. In the case of tyrosine, a similar cherry red-colored complex is formed which then changes into yellow color on dilution and bronze-yellow color on acidification. Each molecule of histidine and tyrosine reacts with two moles of diazonium compound reacts to form a mole of bis(azobenzenesulphonic acid)histidine or bis(azobenzenesulphonic acid)tyrosine.

Result and Interpretation of Pauly’s Test 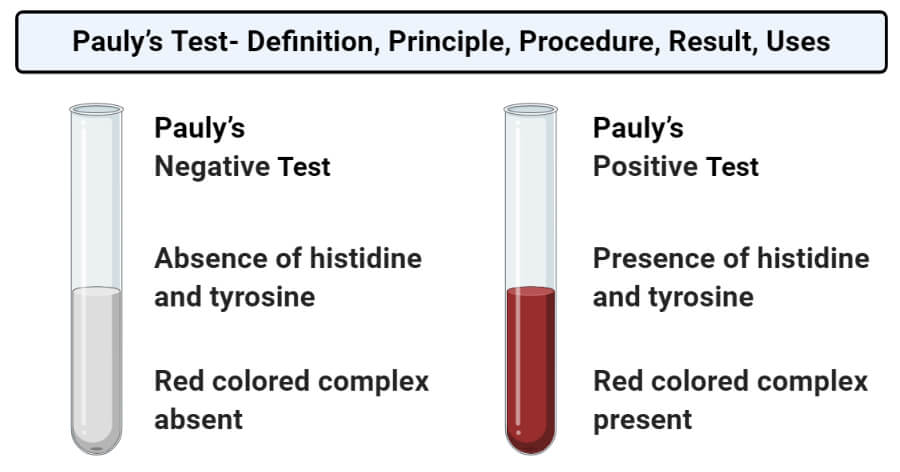