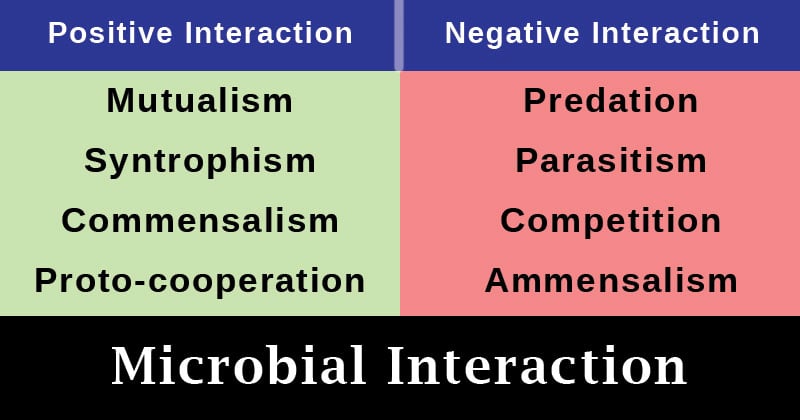 Lichens: Lichens are an excellent example of mutualism. They are the association of specific fungi and certain genus of algae. In lichen, the fungal partner is called mycobiont and algal partner is called phycobiont is a member of cyanobacteria and green algae (Trabauxua).

a. Methanogenic ecosystem in a sludge digester

b. Lactobacillus arobinosus and Enterococcus faecalis

a. Association of Desulfovibrio and Chromatium: It is a protocooperation between the carbon cycle and the sulfur cycle.

b. Interaction between N2-fixing bacteria and cellulolytic bacteria such as Cellulomonas.

a. Non-pathogenic E. coli in the intestinal tract of humans: E. coli is a facultative anaerobe that uses oxygen and lowers the O2 concentration in the gut which creates a suitable environment for obligate anaerobes such as Bacteroides. E. coli is a host which remains unaffected by Bacteroides.

c. Association of Nitrosomonas (host) and Nitrobacter (commensal) in Nitrification: Nitrosomonas oxidize Ammonia into Nitrite and finally, Nitrobacter uses nitrite to obtain energy and oxidize it into Nitrate.

Examples of the antagonism (amensalism):

c. Thiobacillus thiooxidant: Thiobacillus thioxidant produces sulfuric acid by oxidation of sulfur which is responsible for lowering pH in the culture media which inhibits the growth of most other bacteria.

a. Competition between Paramecium caudatum and Paramecium aurelia:  Both species of Paramecium feeds on the same bacteria population when these protozoa are placed together. P. aurelia grow at a better rate than P. caudatum due to competition.

a. Viruses: Viruses are an obligate intracellular parasite that exhibits great host specificity. There are many viruses that are parasite to bacteria (bacteriophage), fungi, algae, protozoa etc.

b. Bdellovibrio: Bdellavibrio is ectoparasite to many gram-negative bacteria.

a. Protozoan-bacteria in soil: Many protozoans can feed on various bacterial population which helps to maintain the count of soil bacteria at optimum level

b. Bdellovibrio, Vamparococcus, Daptobacter, etc are examples of predator bacteria that can feed on a wide range of the bacterial population.

11 thoughts on “Microbial interaction and its types with examples”