Hemicelluloses consist of 50–3000 sugar units as opposed to 7000–15,000 glucose molecules per polymer in cellulose. Hemicellulose is amorphous in structure, not crystalline as cellulose, and therefore more susceptible to hydrothermal extraction and hydrolysis. Hemicelluloses are classified into different groups as xylans, mannans, and glucans on the basis of the primary sugar residue in the backbone. 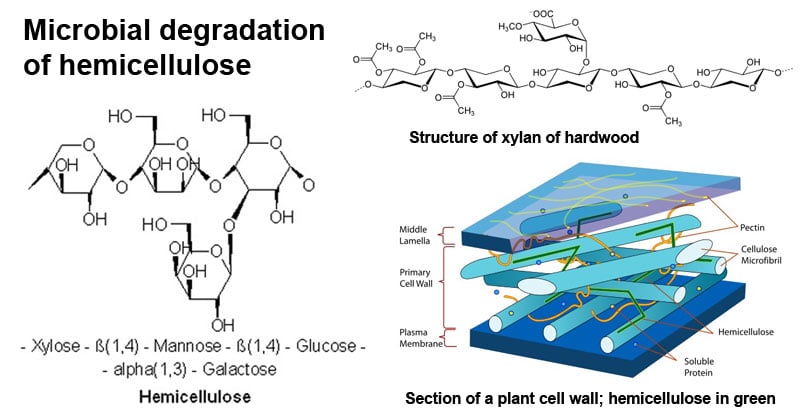 Hemicellulases are a group of enzymes that specifically degrade only hemicelluloses which, in addition to their activity on glycosides, are also frequently capable of hydrolyzing the short-chain or monosaccharide chains from the backbone chain of hemicelluloses.

Enzymes involved in the degradation of hemicellulose

Degradation of hemicelluloses is affected by a number of factors, some of which are:

The process of hemicellulose degradation is more or less similar to that of homopolymers like cellulose. In the case of hemicelluloses, however, one of the two pathways are followed to obtain the monomeric units.

Mechanisms of microbial degradation of hemicellulose