Methyl red test, commonly known as MR test is used to determine the ability of an organism to produce and maintain stable acid end products from glucose fermentation. MR test along with the VP test is performed simultaneously because they are physiologically related and are performed on MRVP broth. All members of the Enterobacteriaceae can convert glucose to pyruvic acid by the Embden-Meyerhof pathway, but bacteria can further metabolize pyruvic acid by two different pathways. Organisms metabolizing pyruvic acid by the mixed acid pathway will produce more acid end products, such as lactic acid and acetic acid, and maintain an acidic environment. The methyl red detects mixed acid fermentation that lowers the pH of the broth. The MR indicator is added after incubation which is red at pH 4.4 and yellow at pH 6.2. If the organism produces a large number of organic acids that include formic acid, acetic acid, lactic acid, and succinic acid from glucose fermentation, the broth medium will remain red after the addition of methyl red, a pH indicator. MR-negative organisms further metabolize the initial fermentation products by decarboxylation to produce neutral acetyl methylcarbinol (acetoin), which results in decreased acidity in the medium and raises the pH towards neutrality (pH 6.0 or above).  For those organisms which do not produce the acid end products, the broth medium will change to yellow coloration indicating a negative test. 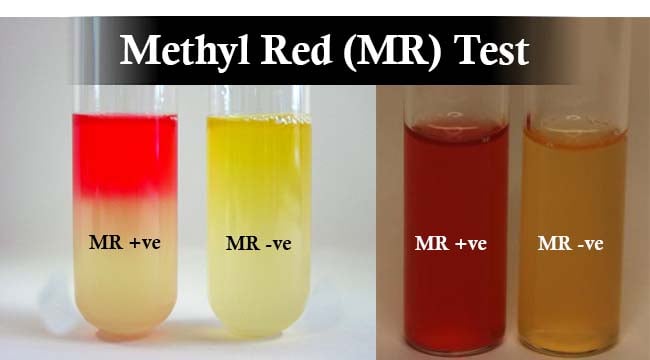