Lipids generally are nonpolar molecules that do not dissolve well in water.  Fats are one type of lipids that are large polymers of fatty acids and glycerol that are too large to enter the cell membrane.  In order to utilize fats, bacterial cells secrete exoenzymes known as lipases outside of the cell that hydrolyze the lipid to fatty acids and glycerol. These bacteria capable of producing exoenzyme lipase are called lipolytic bacteria. The lipids form an emulsion, when dispensed in agar, producing opacity while their hydrolysed end products, glycerol and fatty acids do not form such emulsion with agar, for which they do not produce such opacity; rather produce transparency.

In the lipid hydrolysis test, the test bacteria are grown on agar plates containing tributyrin as the lipid substrate. Tributyrin oil forms an opaque suspension in the agar medium. If the bacteria has the ability to hydrolyse lipids, the bacterial colonies hydrolyse the tributyrin in the medium in the areas surrounding them to soluble glycerol and fatty acids (butyric acid), while the rest of the areas of the plates contain unhydrolysed tributyrin. The result of hydrolysis is demonstrated as a transparent clear zones around the colonies and the rest of the areas of the plates remain opaque indicative of unhydrolysed tributyrin region. 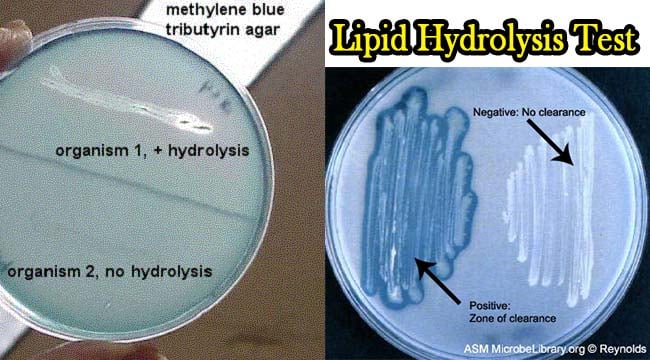