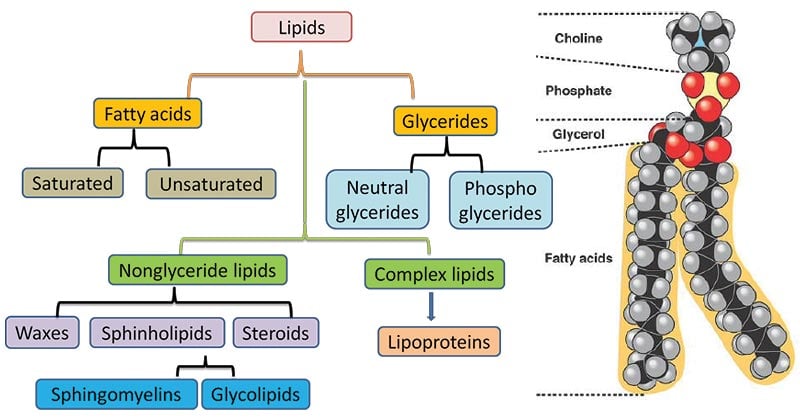 Triglycerols like any other esters react with water to form their carboxylic acid and alcohol– a process known as hydrolysis.

Triacylglycerols may be hydrolyzed by several procedures, the most common of which utilizes alkali or enzymes called lipa­ses. Alkaline hydrolysis is termed saponifica­tion because one of the products of the hydrolysis is a soap, generally sodium or potassium salts of fatty acids.

Unsaturated fatty acids, whether they are free or combined as esters in fats and oils, react with halogens by addition at the double bond(s). The reaction results in the decolorization of the halogen solu­tion.

The term rancid is applied to any fat or oil that develops a disagreeable odor. Hydrolysis and oxidation reactions are responsible for causing rancidity. Oxidative rancidity occurs in triacylglycerols containing unsaturated fatty acids.

Lipids can be classified according to their hydrolysis products and according to similarities in their molecular structures. Three major subclasses are recognized:

(a) Fats and oils which yield fatty acids and glycerol upon hydrolysis.

(b) Waxes, which yield fatty acids and long-chain alcohols upon hydrolysis.

(b) Glycolipids, which yield fatty acids, sphingosine or glycerol, and a carbo­hydrate upon hydrolysis.

They may also be glyceroglycolipids or sphingoglycolipid depending upon the alcohol group present (glycerol or sphingosine).

Hydrolysis product of simple and compound lipids is called derived lipids. They include fatty acid, glycerol, sphingosine and steroid derivatives.

Steroid derivatives are phenanthrene structures that are quite different from lipids made up of fatty acids.

It is established that lipids play extreme­ly important roles in the normal functions of a cell. Not only do lipids serve as highly reduced storage forms of energy, but they also play an intimate role in the structure of cell membrane and organellar membranes.  Lipids perform many functions, such as: