Fats are formed by ester linkage between three molecules of fatty acids and one molecule of glycerol. Simple fats are known as triglycerides or triacylglycerols. Triglycerides are composed of glycerol and three long-chain fatty acids. Enzymes that break simple fat into its component fatty acid and glycerol are known as lipase. Many bacteria can be classified based on their ability to produce and secrete lipases. A variety of simple fats can be used for this determination, depending on the type of organism being tested; however, tributyrin is the simplest naturally occurring triglyceride and thus, a common constituent of lipase testing media.

Tributyrin is too large to enter the cell, so a lipase is released to break it down prior to cellular uptake. After hydrolysis, the glycerol can be converted to dihydroxyacetone phosphate, an intermediate of glycolysis. The fatty acids are catabolized by a process called β-oxidation and may be converted into a variety of end-products that can be used by the cell in energy production or other processes. Tributyrin oil is a type of lipid called a triglyceride. Other lipase tests use different fat sources such as corn oil, olive oil, peanut oil, egg yolk, and soybean oil.

Tributyrin agar is a differential medium that tests the ability of an organism to produce an exo-enzyme, called lipase that hydrolyzes tributyrin oil. Tributyrin agar is prepared as an emulsion so that the agar will appear opaque. When the plate is inoculated with a lipase-positive organism, clear zones will appear around the growth as evidence of lipase activity. If no clear zones appear, the organism is lipase-negative. 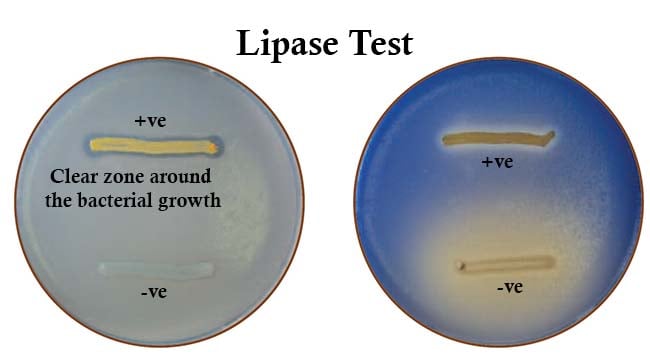 Negative Lipase test: the absence of a clear zone around the bacterial growth