Hopkin’s Cole test is a specific test used for the detection of indole ring and thus, tryptophan in proteins. The test is also termed as ‘glyoxylic acid test’ as the reagent contains glyoxylic acid. The test was discovered by Frederick Gowland Hopkins and Sydney W. Cole in 1901 as a part of their work on the discovery of tryptophan. Hopkin’s Cole test is extremely similar to the Adamkiewez reaction, which is similar in principle to this test. Hopkin’s Cole test was criticized by Rosenheim, who argued that the glyoxylic acid used in the test could easily decompose into formaldehyde and carbon dioxide at high temperatures. The use of formaldehyde to detect tryptophan was discovered by Rosenheim. Hopkin’s Cole test is one of the color reactions used for the detection of particular amino acids or proteins on the basis of the formation of a specific color. The test detects the indole ring that is found in tryptophan amino acid, which in turn helps in the identification of proteins containing tryptophan.

The test is based on the principle that the layering of concentrated sulfuric acid over a mixture of tryptophan-containing proteins with the Hopkin’s Cole reagent results in the formation of a violet ring at the interface. The glyoxylic acid added to the sample combines two tryptophan molecules by acting on the indole ring of the tryptophan molecules. The condensation product thus formed undergoes dehydration to form a violet colored pigment. The color developed in the test is due to the indole group of the tryptophan molecule, which is converted into a colored compound by oxidation brought about by the aldehyde group of glyoxylic acid. The H2SO4 added to the reagent helps to stabilize the glyoxylic acid and prevent its decomposition and the release of carbon dioxide. 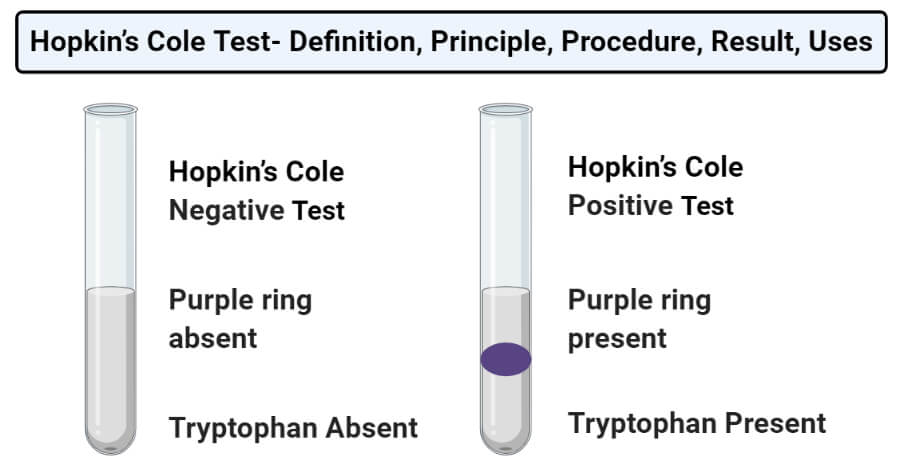