Indole test is a biochemical test conducted on bacterial species to detect their ability to produce indole from tryptophan in the presence of a group of enzymes called ‘tryptophanase’.

The ability of an organism to split indole from the amino acid tryptophan is due to the presence of tryptophanase. Tryptophan is an amino acid that undergoes deamination and hydrolysis in the presence of the enzyme tryptophanase. Reductive deamination of tryptophan results in the production of indole via the intermediate molecule indole pyruvic acid. During the deamination process, the tryptophanase catalyzes the removal of the amino group (-NH2) from the tryptophan molecule. The enzyme requires pyridoxal phosphate as a coenzyme. The final products of the catalysis reaction are indole, pyruvic acid, ammonium (NH4+), and energy. Indole, if present, combines with the aldehyde in the reagent to produce a pink to red-violet quinoidal compound (benzaldehyde reagent) or a blue to green color (cinnamaldehyde reagent). The indole combines with Kovac’s reagent (hydrochloric acid and p-dimethylaminobenzaldehyde in amyl alcohol) solution to form a yellow or cherry red coloration. The amyl alcohol is water-insoluble and thus, forms a red-colored oily layer at the top of the broth. In the rapid spot test, indole is detected directly from a colony growing on a medium rich in tryptophan. The indole combines with the p-dimethylaminocinnamaldehyde (DMACA) present on the filter paper at an acid pH to produce a blue to the blue-green compound. 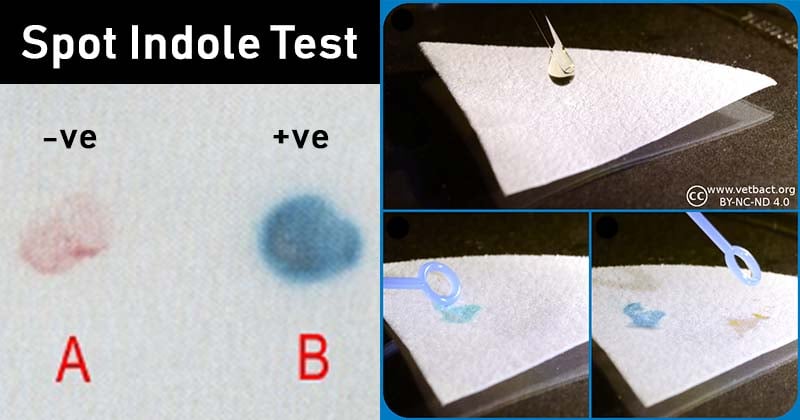 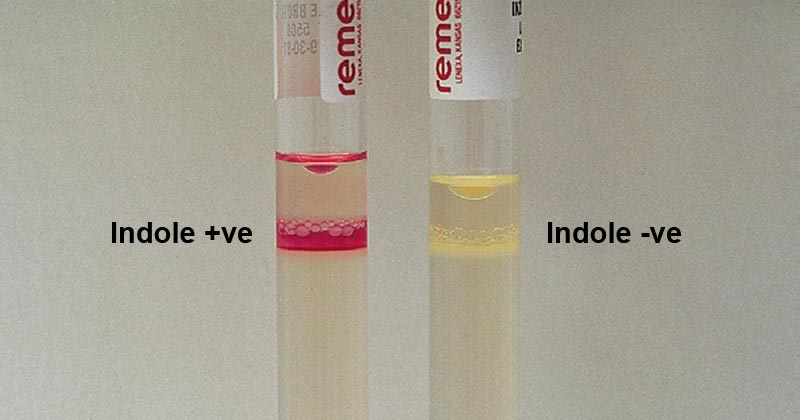