Hippurate hydrolysis test is a biochemical test that differentiates microorganisms on the basis of their ability to hydrolyze hippurate into glycine and benzoic acid by the enzymatic action of hippuricase.

The hippurate test is based on the ability of the organism to hydrolyze sodium hippurate to benzoic acid and glycine by the action of the enzyme hippuricase. It is primarily used in the identification of Campylobacter jejuni, Listeria monocytogenes, Gardnerella vaginalis, and Streptococcus agalactiae. The ability of bacterial species to hydrolyze hippurate was classically tested using a ferric chloride indicator to detect benzoic acid. However, a 2 hr rapid method, as opposed to the 48 hr traditional method, for the detection of hippurate hydrolysis has since been developed. The rapid test involves ninhydrin as the indicator, which reacts with any protein or amino acid and, in this case, detects glycine. Glycine is deaminated by the oxidizing action of ninhydrin which causes the reduction of ninhydrin, resulting in a purple-colored complex. The test medium used must only have hippurate as a protein source since ninhydrin reacts with any free amino acids present. The rapid hippurate hydrolysis test, which detects the benzoic acid by-product, has been shown to be as sensitive and as specific as the classical method.

A. Preparation of hippurate solution 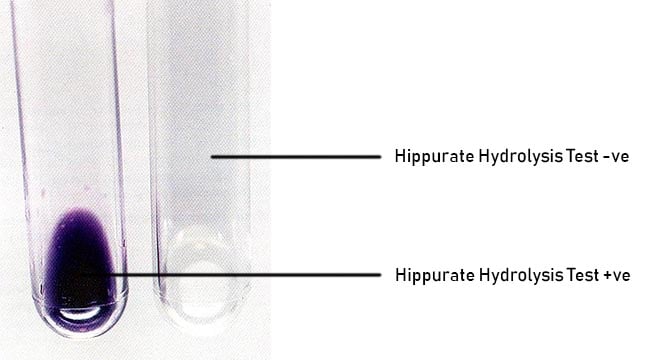