A genus Streptococcus is a heterogeneous group of Gram-positive bacteria. Various streptococci are considered as the normal microbial flora of animals and humans, while some species under favorable conditions can also cause diseases ranging from sub-acute infection to acute or even chronic diseases/infections. Streptococci are spherical organisms that grow in chains because of incomplete separation after the division of the cells. In the earlier days, hemolysis which is lysis of erythrocytes on the blood agar medium by enzymes (toxin) released by the organism was considered as a useful identifying characteristic of streptococci. Based on hemolytic characteristics, streptococci were classified into β-hemolytic and non-β-hemolytic groups. In 1934, streptococci were further classified in the name of Lancefield grouping, based on the presence of group-specific wall polysaccharides on the bacterial surface. Thirteen different serological groups have so far been identified, out of which groups A, B, C, and G, Streptococcus pneumoniae, and viridans group streptococci are most important with regards to human health. Hemolysis is the breakdown of red blood cells (RBC). The organism capable of producing the toxin named hemolysin aid in the hemolysis process. Brown (1919) introduced three terms alpha, beta, and gamma to indicate three types of streptococci based on hemolytic reactions observed on blood agar plates. 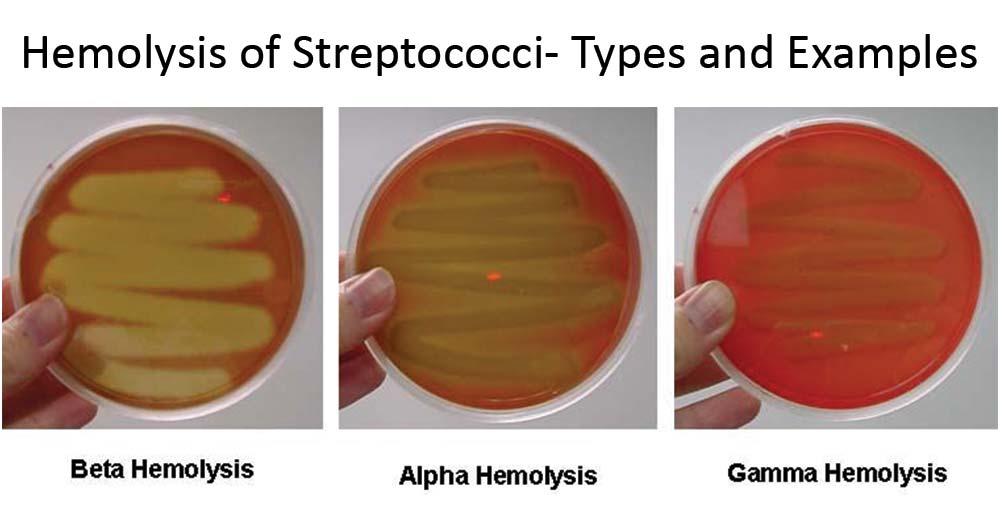 Beta-hemolysis (β-hemolysis) is defined as the complete lysis of hemoglobin of red blood cells surrounding the colony on blood agar. A clear zone with the transparency of the base medium surrounds the colony when observed under the light. Beta hemolysis is caused by two hemolysins O and S where hemolysin O is oxygen liable (inactive in the presence of oxygen) and hemolysin S is oxygen stable cytotoxin. Beta hemolysis is more marked when the plate has been incubated anaerobically. The organism produces different toxic by-products that help in the destruction of the red cells or lysis of hemoglobin.

In some cases, hemolytic reactions demonstrate some synergy which accounts for the combination of reactions. The combined reaction produces a significant reaction which is stronger than either reaction alone. Streptococcus agalactiae is weakly beta-hemolytic. However, if the bacteria are in close proximity with a strain of Staphylococcus species, the beta-hemolysins produced by both organisms combine to produce an intense beta-hemolytic reaction with greater visibility and clarity. This particular test showing the synergy reaction is called the CAMP test (Christie- Atkins- Munch- Peterson test).

Alpha hemolytic streptococci are gram-positive, spherical, and non-motile organisms whose cells are organized in pairs or short chains. They are facultative anaerobes and form a characteristic α-hemolytic zone on blood agar plates. Alpha hemolysis is a partial or smaller zone of hemolysis that has the characteristic narrow grass- green zone that is observed around the colonies on the blood agar. The organism causes oxidization of iron in hemoglobin molecules within red blood cells to produce methemoglobin. There is partial hemolysis of the hemoglobin leaving behind the greenish coloration around the colonies on the agar medium. Microscopic inspection of alpha-hemolyzed red blood cells shows that the cell membrane is intact, so it is not, in fact, true lysis.

Note: It is most important to not confuse the “partial” or “incomplete” hemolysis with the “weak” or “subtle” lysis of group B streptococci Streptococcus agalactiae. In the case of beta hemolysis, the brown or green discoloration of the cells in the surrounding medium is not observed. On prolonged incubation, many alpha-hemolytic reaction at the initial phase will begin to appear more vivid and distinct, but if the surrounding medium contains any shades of brown or green the “hemolysis” is still considered “alpha.”

Gamma hemolysis is indicative of no hemolysis or lack of hemolysis around the bacterial colony. The colonies on the blood agar show neither typical alpha nor beta hemolysis. There may be, however, slight discoloration in the medium. A blood agar plate displaying gamma hemolysis actually appears brownish as the normal reaction of the blood occurs due to the growth conditions used (37° C in the presence of CO2).

Hemolysis of Streptococci – Types and Examples

1 thought on “Hemolysis of Streptococci- Types and Examples with Images”