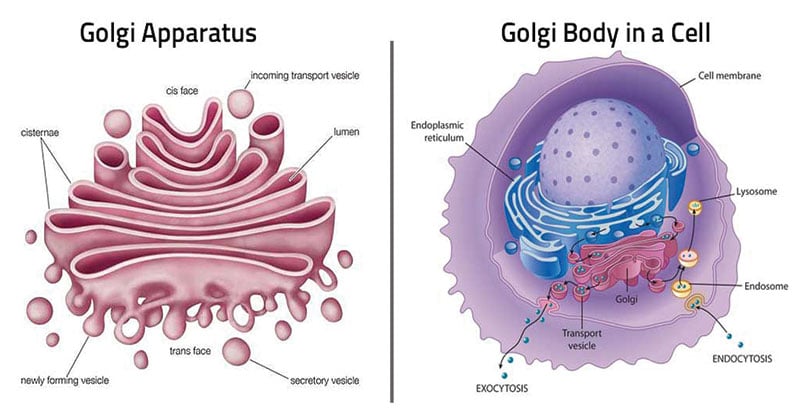 Figure: Diagram of the Golgi Apparatus

The vesicles (60 nm in diameter) are of three types:

(i) Transitional vesicles are small membrane limited vesicles which are thought to form as blebs from the transitional ER to migrate and converge to cis face of Golgi, where they coalesce to form new cisternae.

(ii) Secretory vesicles are varied-sized membrane-limited vesicles that discharge from margins of cisternae of Golgi. They, often, occur between the maturing face of Golgi and the plasma membrane.

(iii) Clathrin-coated vesicles are spherical protuberances, about 50 μm in diameter and with a rough surface. They are found at the periphery of the organelle, usually at the ends of single tubules, and are morphologically quite distinct from the secretory vesicles. The clathrin-coated vesicles are known to play a role in intracellular traffic of membranes and of secretory products, i.e., between ER and Golgi, as well as, between the GELR region and the endosomal and lysosomal compartments.

1. Golgi vesicles are often, referred to as the “traffic police” of the cell. They play a key role in sorting many of the cell’s proteins and membrane constituents, and in directing them to their proper destinations.

2. In animals, the Golgi apparatus is involved in the packaging and exocytosis of the following materials :

3. It is also involved in the formation of certain cellular organelles such as plasma membrane, lysosomes, acrosome of spermatozoa and cortical granules of a variety of oocytes.

4. They are also involved in the transport of lipid molecules around the cell.

5. The Golgi complex also plays an important role in the production of proteoglycans. The proteoglycans are molecules that are present in the extracellular matrix of the animal cells.

6. It is also a major site of synthesis of carbohydrates. These carbohydratres include the synthesis of glycosaminoglycans, Golgi attaches to these polysaccharides which then attaches to a protein produced in the endoplasmic reticulum to form proteoglycans.

7. The Golgi involves in the sulfation process of certain molecules.

8. The process of phosphorylation of molecules by the Golgi requires the import of ATP into the lumen of the Golgi.

9. In plants, Golgi apparatus is mainly involved in the secretion of materials of primary and secondary cell walls (e.g., formation and export of glycoproteins, lipids, pectins and monomers for hemicellulose, cellulose, lignin, etc.)