Esbach test is one of the oldest biochemical tests used to detect urinary protein like albumin when the urine is combined with citric and picric acid. Esbach test, even though not discussed much through the history, is useful for both qualitative and quantitative determination of albumin in the urine sample. The test was discovered by Georges Hubert Esbach in 1874 as one of the earliest attempts at quantification of albumin in the urine.

Esbach test has continuously been criticized for precipitating not just albumin but all other proteins in urine like peptones, mucin, and proteoses. However, later a modified version of the test to detect just the albumin and nothing else was described by Purdy. The basis of this test is the formation of precipitation when the urine is mixed with a reagent containing picric and citric acid. The quantification of the protein can then be done by measuring the height of the deposit, which gives a measured quantity of albumin. This test, nonetheless, has its limitations. Even though it has been demonstrated to detect gross changes in proteinuria, the Esbach test is too inaccurate at low levels of proteins. However, the use of a modified version of the Esbach test is encouraged by some scientists as it is a very simple method that can be performed daily and gives instant results.

The test is based on the principle of precipitation of albumin in the presence of organic acids. The organic acids (citric acid and picric acid) added to the sample exist as negative ions in the solution form. Similarly, the proteins in the urine sample exist as cations when the isoelectric pH of the protein is on the acidic side. Thus, it is essential that the urine sample to be tested has to be acidic enough for the dissociation to take place. When the organic acids are added to the sample, the positively charged ions of proteins combine with the negatively charged ions of the organic acids. As a result, a salt of protein is formed with results in the formation of a precipitate. For the quantitative estimation of albumin, the precipitation formed in the tube is measured by the means of graduations present on the albuminometer tube used for the test. In order to estimate just albumin, a modified version of the Esbach test is developed. As per the modified method, urine is reacted with 10% potassium ferrocyanide, and acetic acid in a specially designed graduated conical flask. After about five minutes of centrifugation, it is said that every 0.1 ml of precipitate represents 1% albumin.

Result and Interpretation of Esbach test 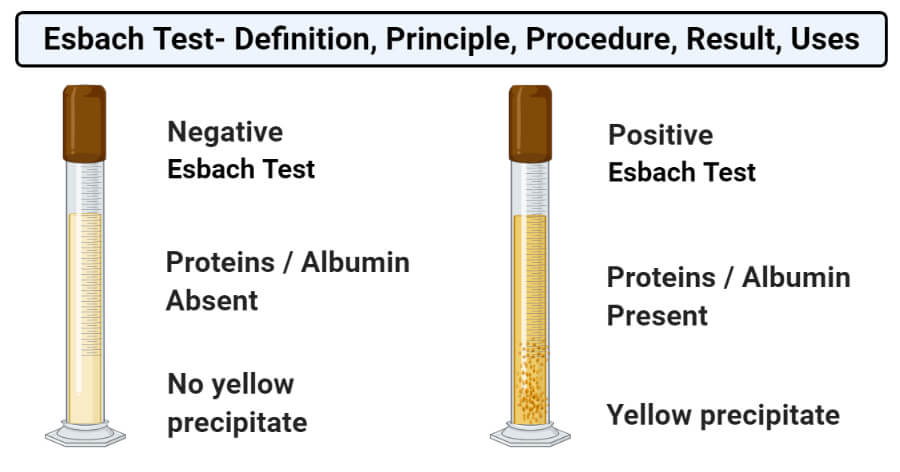