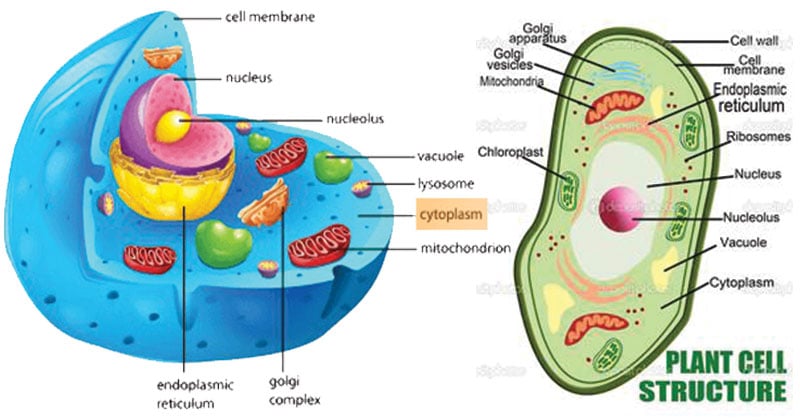 Structure/ Components of the Cytoplasm

The main components of the cytoplasm are:

The cytosol is the part of the cytoplasm that is not occupied by any organelle. It is a gelatinous fluid, where other components of the cytoplasm remain suspended. It mainly consists of cytoskeleton filaments, organic molecules, salt, and water.

Organelles mean “little organs”, that are membrane-bound. They are present inside the cell and perform specific functions that are necessary for the survival of the cell. Some of the constituents of the cell that are suspended in the cytosol are cellular organelles like mitochondria, endoplasmic reticulum, Golgi apparatus, vacuoles, lysosomes, and chloroplasts in plant cells.

The cytoplasmic inclusions consist of different types of insoluble particles or molecules that remain suspended in the cytosol. Cytoplasmic inclusions are not surrounded by any membrane. They are basically granules of starch and glycogen, and they can store energy. A vast range of inclusions are present in different cell types. The inclusions range from calcium oxalate crystals or silicon dioxide crystals in plants to storage granules of materials like starch, glycogen, etc. Lipid droplets are a widespread example of inclusions, these are spherical droplets, they are made of lipids and proteins and are present in both prokaryotes and eukaryotes as a medium to store lipids like fatty acids and sterols.