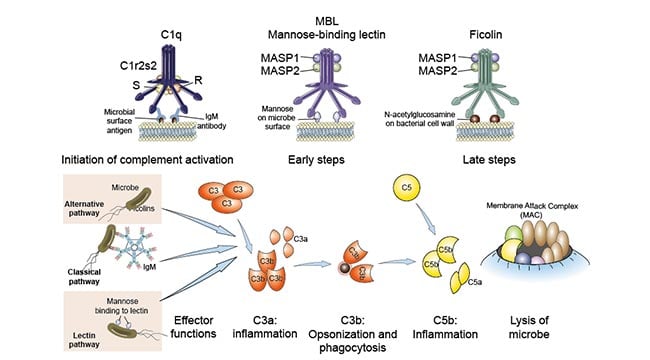 Complement activation takes place through any of the following three pathways:

The complement system is activated by microbes and by antibodies that are attached to microbes and other antigens.

It is activated by certain isotypes of antibodies bound to antigens; the alternative pathway, which is activated on microbial cell surfaces in the absence of antibody; and the lectin pathway, which is activated by a plasma lectin that binds to mannose residues on microbes. Although the pathways of complement activation differ in how they are initiated, all of them result in the generation of enzyme complexes that are able to cleave the most abundant complement protein, C3. The classical pathway, so called because it was discovered first, uses a plasma protein called C1q to detect antibodies bound to the surface of a microbe or other structure. Once C1q binds to the Fc portion of the antibodies, two associated serine proteases, called C1r and C1s, become active and initiate a proteolytic cascade involving other complement proteins. The classical pathway is one of the major effector mechanisms of the humoral arm of adaptive immune responses. Innate immune system soluble proteins called pentraxins, can also bind C1q and initiate the classical pathway.

It was discovered later but is phylogenetically older than the classical pathway, is triggered when a complement protein called C3 directly recognizes certain microbial surface structures, such as bacterial LPS. C3 is also constitutively activated in solution at a low level and binds to cell surfaces, but it is then inhibited by regulatory molecules present on mammalian cells. Because microbes lack these regulatory proteins, the spontaneous activation can be amplified on microbial surfaces. Thus, this pathway can distinguish normal self from foreign microbes on the basis of the presence or absence of the regulatory proteins.

It is triggered by a plasma protein called mannose-binding lectin (MBL), which recognizes terminal mannose residues on microbial glycoproteins and glycolipids, similar to the mannose receptor on phagocyte membranes described earlier. MBL is a member of the collectin family (discussed later) with a hexameric structure similar to the C1q component of the complement system. After MBL binds to microbes, two zymogens called MASP1 (mannose-associated serine protease 1, or mannan-binding lectin-associated serine protease) and MASP2, with similar functions to C1r and C1s, associate with MBL and initiate downstream proteolytic steps identical to the classical pathway.

The central event in complement activation is proteolysis of the complement protein C3 to generate biologically active products and the subsequent covalent attachment of a product of C3, called C3b, to microbial cell surfaces or to antibody bound to antigen.

The initiating pathways have several things in common. They are triggered by

Each initiating pathway is triggered by a different type of activator, usually a cell, microbe, or molecular aggregate that presents charge patterns that are “recognized” by components of the individual initiating pathway.

Each complement pathway has unique proteins for the initiating step, but shares the same or related proteins for the intermediate steps, and uses the same components in the last step, culminating in the same activities. Complement activation represents the dynamic interplay among the different pathways, the control processes, and other protein systems and cells in the local environment.

Complement activation promotes phagocytosis because C3b becomes covalently linked to microbes, and phagocytes (neutrophils and macrophages) express receptors for C3b. Peptides produced by proteolysis of C3 (and other complement proteins) stimulate inflammation. The C5 convertase assembles after the prior generation of C3b, and this convertase contributes both to inflammation (by generation of the C5a fragment) and to the formation of pores in the membranes of microbial targets. The pathways of complement activation differ in how C3b is produced but follow a common sequence of reactions after the cleavage of C5.