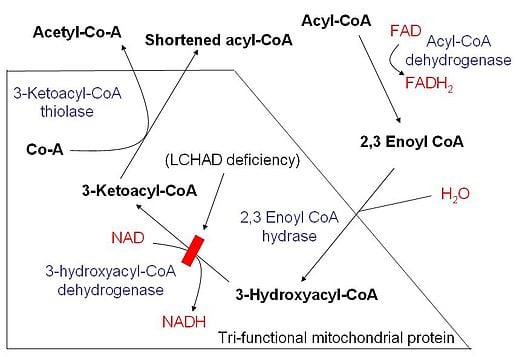 Beta-Oxidation takes place in the mitochondria of eukaryotes while in the cytosol in the prokaryotes.

The Pathway of Beta-Oxidation

A. Activation of fatty acids

B. Transport of fatty acyl-CoA from the cytosol into mitochondria

β-Oxidation (in which all reactions involve the β-carbon of a fatty acyl-CoA) is a spiral consisting of four sequential steps, the first three of which are similar to those in the TCA cycle between succinate and oxaloacetate. These steps are repeated until all the carbons of an even-chain fatty acyl-CoA are converted to acetyl-CoA.

1. When one palmitoyl-CoA is oxidized, seven FADH2, seven NADH, and eight acetyl-CoA are formed.

2. The net ATP produced from palmitate that enters the cell from the blood is about 106 because palmitate must undergo activation (a process that requires the equivalent of 2 ATP) before it can be oxidized (108 ATP − 2 ATP = 106 ATP).

3. The oxidation of other fatty acids will yield different amounts of ATP.

(2) If the double bond originated at an even carbon number (such as 4, 6, 8, etc.), the eventual trans-Δ 2, cis-Δ 4 fatty acid will be reduced by a 2,4-dienoyl-CoA reductase, which requires NADPH and generates a trans-Δ 3-acyl-CoA and NADP1. The isomerase will convert the trans-Δ 3 fatty acyl-CoA to a trans-Δ 2 fatty acyl-CoA to allow β-oxidation to continue. 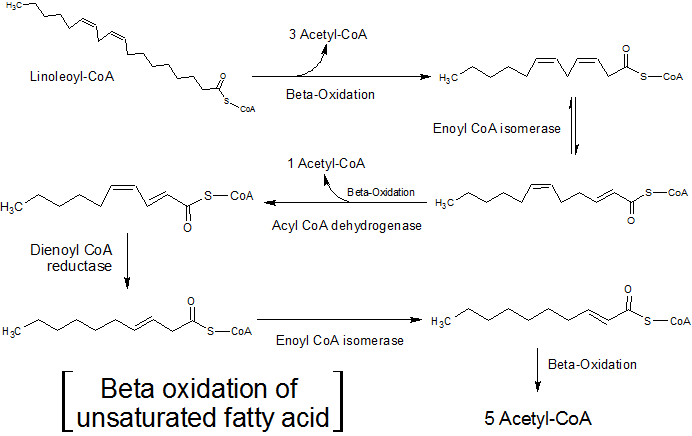 (2) If the double bond originated at an even-numbered carbon position, then compared to an equivalent length fully saturated fatty acid, there is one less NADH equivalent (or 2.5 ATP) produced, due to the use of NADPH in the step catalyzed by the 2,4-dienoyl-CoA reductase.

The overall reaction for one cycle of beta oxidation is:

Regulation of Beta-oxidation of Fatty Acids

β-Oxidation is regulated by the mechanisms that control oxidative phosphorylation (i.e., by the demand for ATP).

Fatty acids, which are the major source of energy in the human body, are oxidized mainly by β-oxidation. 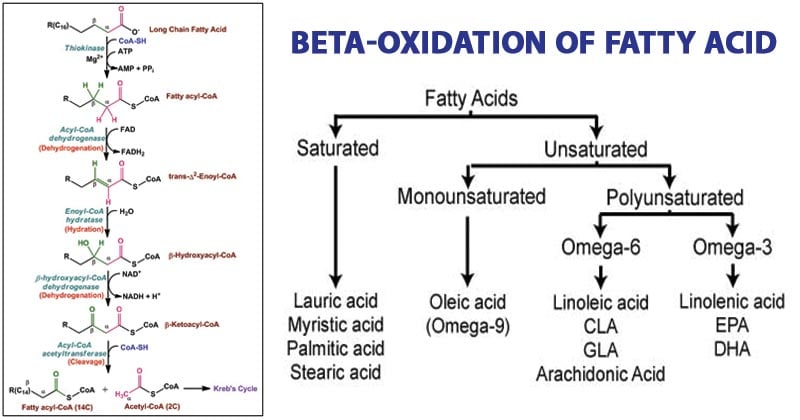 5 thoughts on “Beta-oxidation of Fatty Acid”