The most probable number (MPN) analysis is a statistical method based on the random dispersion of microorganisms per volume in a given sample. 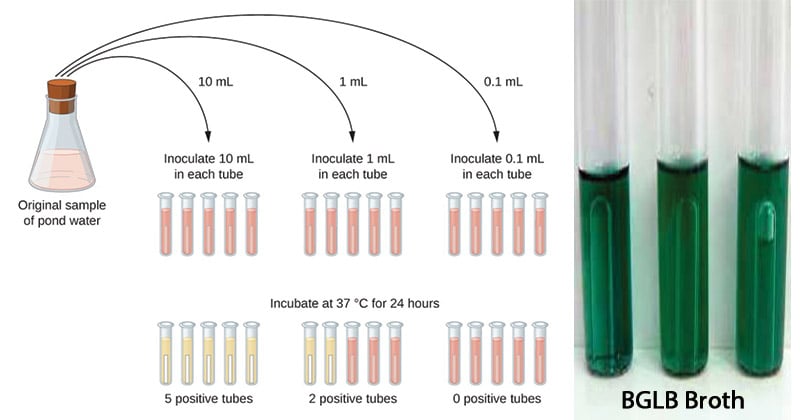 This test, a specific enrichment procedure for coliform bacteria, is conducted in fermentation tubes filled with a selective growth medium (MacConkey lactose broth), which contains inverted Durham tubes for the detection of fermentation gas. A series of lactose broth tubes are inoculated with measured amounts of the water sample to be tested. The series of tubes may consist of three or four groups of three, five, or more tubes.

The main selective factors found in the medium are lactose, sometimes a surfactant such as Na-lauryl sulfate or Na-taurocholate (bile salt), and often a pH indicator dye for facilitating detection of acid production, such as bromcresol purple or brilliant green. The selective action of lactose occurs because many bacteria cannot ferment this sugar, whereas coliform bacteria and several other bacterial types can ferment it. The surfactant and dye do not inhibit coliform bacteria, whereas many other bacteria, such as the spore formers, are inhibited.

This test serves to confirm the presence of coliform bacteria when either a positive or doubtful presumptive test is obtained.

This test helps to further confirm doubtful and, if desired, positive confirmed test results. A typical coliform colony from an LES Endo agar plate is inoculated into a tube of brilliant green bile broth and on the surface of a nutrient agar slant. They are then incubated at 35°C for 24 hours. After 24 hours, the broth is checked for the production of gas, and a Gram stain is made from organisms on the nutrient agar slant. If the organism is a Gram-negative, non-spore-forming rod and produces gas in the lactose tube, then it is positive that coliforms are present in the water sample.

Objectives of Most Probable Number (MPN)

Procedure of Most Probable Number (MPN) 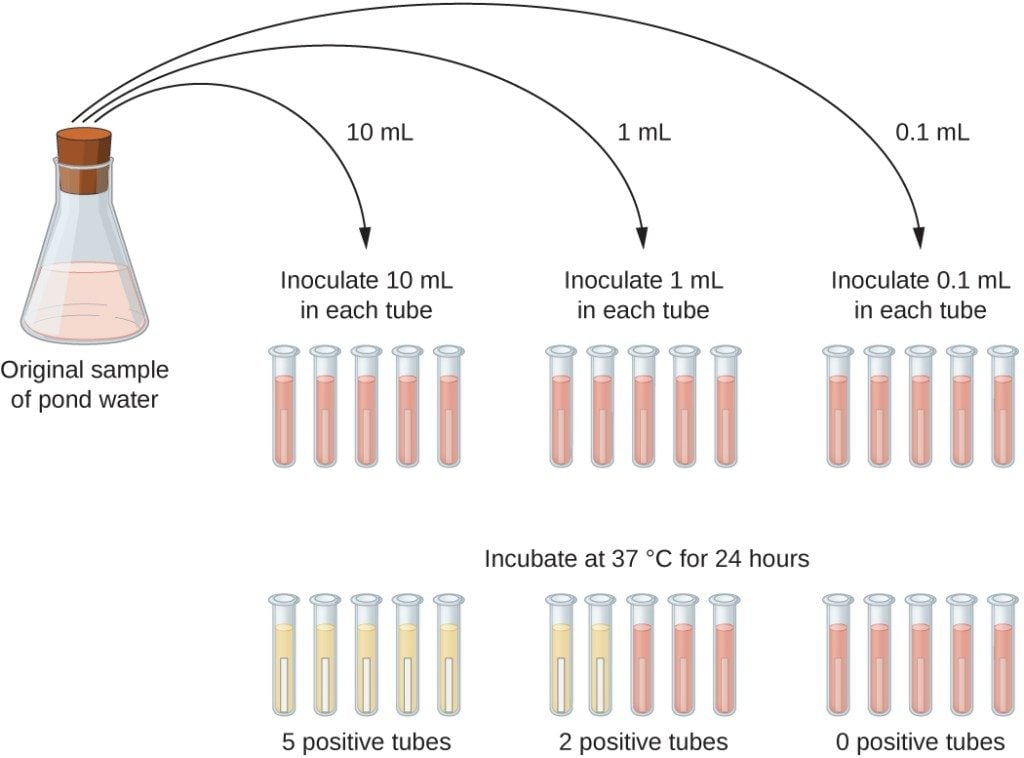 Some microorganisms other than coliforms also produce acid and gas from lactose fermentation. In order to confirm the presence of coliform, a confirmatory test is done. For this, a loopful of suspension from a positive tube is inoculated into a 3 ml lactose-broth or brilliant green lactose fermentation tube and to an agar plate (EMB agar or Endo Agar) or slant. 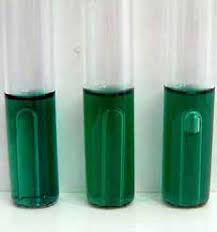 A. Inoculation of the lactose-broth

B. Inoculation in media slants

Results of Most Probable Number (MPN)

Positive: The formation of 10% gas or more in the Durham tube within 24 to 48 hours, together with turbidity in the growth medium and the color change in the medium constitutes a positive presumptive test for coliform bacteria, and hence for the possibility of fecal pollution.

Negative: No growth or formation of gas in Durham’s tube.

Positive: Formation of gas in lactose broth and the demonstration of a coliform-like colony on the EMB agar indicate the presence of a member of the coliform group in the sample examined.

Coliforms produce colonies with a greenish metallic sheen which differentiates them from non-coliform colonies (show no sheen). The presence of typical colonies at high temperatures (44.5 ±0.2) indicates the presence of thermotolerant E.coli.

Negative: The absence of gas formation in lactose broth or the failure to demonstrate coliform-like colonies on the EMB agar.

Positive: The presence of gas in the brilliant green bile broth tube and Gram-negative, non-spore-forming rods on NA slant constitutes a positive completed test for the presence of coliform bacteria, which, in turn, infers possible contamination of the water sample with fecal matter.

Negative: Absence of growth and gas formation in the broth. Absence of gram-negative, non-sporing rods on Gram staining.

Uses of Most Probable Number (MPN)

Advantages of Most Probable Number (MPN)

Limitations of Most Probable Number (MPN)

3 thoughts on “Water Quality Analysis by Most Probable Number (MPN)”