Urease test is a biochemical test that detects the alkaline fermentation of urine (urea) with the resultant production of ammonia by microorganisms.

The urea test is part of the battery of tests to identify the following:

Directly, this test is performed as a rapid test on gastric biopsy samples to detect the presence of H. pylori.

Urea medium, whether a broth or agar, contains urea and the phenol red as a pH indicator. Many organisms, especially those that cause urinary tract infections, produce the urease enzyme, which catalyzes the splitting of urea in the presence of water to release two molecules of ammonia and carbon dioxide. The ammonia combines with the carbon dioxide and water to form ammonium carbonate, which turns the medium alkaline, turning the indicator from its original orange-yellow color to bright pink. This test is performed as part of the identification of several genera and species of the Enterobacteriaceae family, including Klebsiella, Proteus, and some Citrobacter and Yersinia species, as well as some Corynebacterium species. The test is also useful to identify Cryptococcus, Brucella, Helicobacter pylori, and many other bacteria that produce the urease enzyme. Disks are available that combine urea and phenylalanine deaminase (PDA), allowing a one-disk test to identify Proteus, Providencia, and Morganella and to separate them from Klebsiella and Yersinia enterocolitica. The disk reactions are rapid and sensitive and allow for the rapid detection of agents of serious infections, g., Brucella, and Cryptococcus.

A. Preparation of media 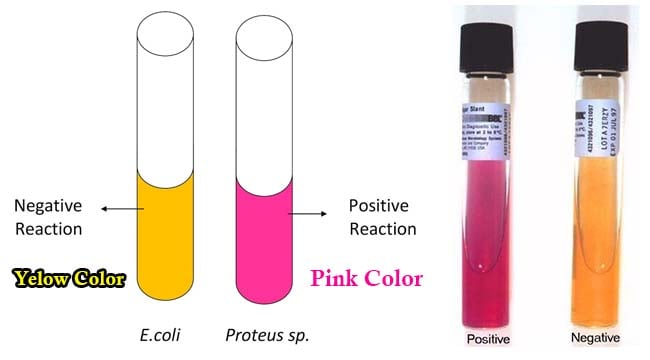