Some antigens can be exogenous in origin but later can turn endogenous. E.g. Intracellular viruses. 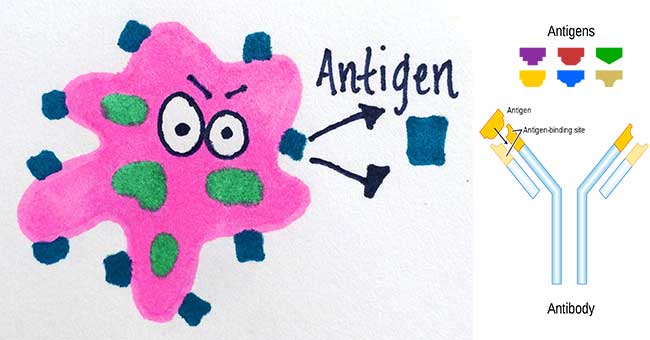 On the basis of immune response

Carrier molecule is a non-antigenic component and helps in provoking the immune response. Example: Serum Protein such as Albumin or Globulin

Superantigens (SAgs) are a class of antigens that cause non-specific activation of T-cells resulting in polyclonal T cell activation and massive cytokine release. SAgs are produced by some pathogenic viruses and bacteria most likely as a defense mechanism against the immune system.

Superantigens are a class of molecules that can interact with APCs and T lymphocytes in a nonspecific way. The superantigens act differently by interacting with MHC class II molecules of the APC and the Vb domain of the T-lymphocyte receptor. This interaction results in the activation of a larger number of T cells (10%) than conventional antigens (1%), leading to massive cytokine expression and immunomodulation.

When the immune system encounters a conventional T-dependent antigen, only a small fraction (1 in 104 -105) of the T cell population is able to recognize the antigen and become activated (monoclonal/oligoclonal response). However, there are some antigens which polyclonally activate a large fraction of the T cells (up to 25%). These antigens are called superantigens.

The diseases associated with exposure to superantigens are, in part, due to hyper activation of the immune system and subsequent release of biologically active cytokines by activated T cells.

Autoantigens: These are antigens despite being a normal tissue constituent, is the target of a humoral or cell-mediated immune response, such as in autoimmune disease. E.g. Thyroglobulin, DNA, Corneal tissue, etc.

Alloantigens: These are antigens found in different members of the same species. E.g. Red blood cell antigens A and B.

Types of Antigen on the basis of source and immune response