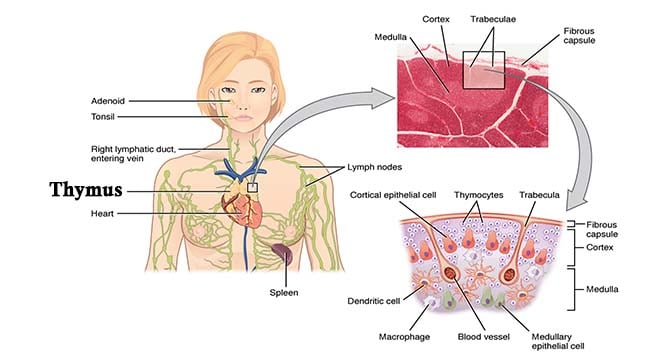 Immature T cell precursors travel from the bone marrow to the thymus (to become thymocytes) where they generate antigen specificity, undergo thymic education, and then migrate to the peripheral lymphoid tissues as mature T cells.

The main functions of the thymus as a primary lymphoid organ are to:

(a) To produce sufficient numbers (millions) of different T cells each expressing unique T cell receptors (generate diversity) such that in every individual there are at least some cells potentially specific for each foreign antigen in the environment.

(b) To select T cells for survival in such a way that the chance for an auto-immune response is minimized.

The thymus has an interactive role with the endocrine system. Thymic epithelial cells produce the hormones thymosin and thymopoietin and in concert with cytokines (such as IL-7) are probably important for the development and maturation of thymocytes into mature T cells.

1 thought on “Thymus- Structure and Functions”