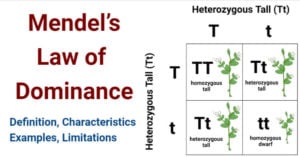 Mendel’s Law of Dominance Definition Mendel’s Law of Dominance states that ‘In crossing between homozygous organisms for contrasting characters of a pair, only one character of the pair appears in the first generation.’ The law of dominance is the first law of heredity proposed from the works of Mendel. The law explains that all characters in an individual are controlled by distinct units called factors that occur in pairs. The pair can be homozygous or heterozygous, and in the case … Read more 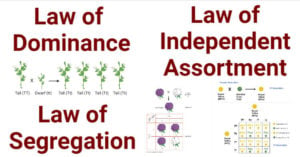 In the 1860s, an Austrian monk named Gregor Mendel introduced a new theory of inheritance based on his experimental work with pea plants. Mendel believed that heredity is the result of discrete units of inheritance, and every single unit (or gene) was independent in its actions in an individual’s genome. According to this Mendelian concept, the inheritance of a trait depended on the passing-on of these units. For any given trait, an individual inherits one gene from each parent so that … Read more