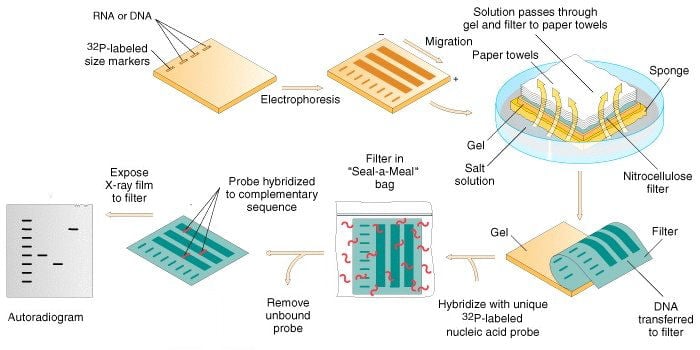 Restriction endonucleases are used to cut high-molecular-weight DNA strands into smaller fragments. One or more restriction enzymes can be used to achieve such fragments.

The separation may be done by agarose gel electrophoresis in which the negatively charged DNA fragments move towards the positively charged anode, the distance moved depending upon its size.

Partial depurination is done by the use of dilute HCl which promotes higher efficiency transfer of DNA fragments by it breaking down into smaller pieces.

DNA is then denatured with a mild alkali such as an alkaline solution of NaOH. This causes the double stranded DNA to become single-stranded, making them suitable for hybridization. DNA is then neutralized with NaCl to prevent re-hybridization before addition of the probe.

The nitrocellulose membrane is removed from the blotting stack, and the membrane with single stranded DNA bands attached on to it is baked in a vacuum or regular oven at 80 °C for 2-3 hours or exposed to ultraviolet radiation to permanently attach the transferred DNA onto the membrane.

The membrane is then exposed to a hybridization probe which is a single DNA fragment with a specific sequence whose presence in the target DNA is to be determined. The probe DNA is labeled so that it can be detected, usually by incorporating radioactivity or tagging the molecule with a fluorescent or chromogenic dye.

After hybridization, the membrane is thoroughly washed with a buffer to remove the probe that is bound nonspecifically or any unbound probes present.

The hybridized regions are detected autoradiographically by placing the nitrocellulose membrane in contact with a photographic film which shows the hybridized DNA molecules. The pattern of hybridization is visualized on X-ray film by autoradiography in case of a radioactive or fluorescent probe is used or by the development of color on the membrane if a chromogenic detection method is used.

2 thoughts on “What is Southern Blotting?”