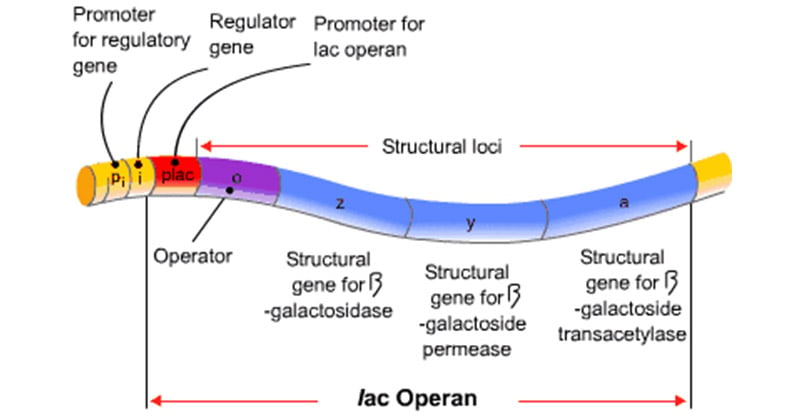 Working of an Inducer:

(1) The inducer binds to the repressor, inactivating it.

(2) The inactive repressor does not bind to the operator.

(3) RNA polymerase, therefore, can bind to the promoter and transcribe the operon.

(4) The structural proteins encoded by the operon are produced.

If glucose is not present in the provided medium but another sugar is available, E. coli produces the enzymes and other proteins that allow the cell to derive energy from that sugar.

The process by which the synthesis of the enzymes is regulated is called induction.

The Lac operon is inducible.

Working of a Repressor

(1) The corepressor binds to the repressor, activating it.

(2) The active repressor binds to the operator.

(3) RNA polymerase, therefore, cannot bind to the promoter, and the operon is not transcribed.

(4) The cell stops producing the structural proteins encoded by the operon.

If an amino acid is present in the medium, E. coli does not need to synthesize that amino acid and conserves energy by ceasing to produce the enzymes required for its synthesis. The process by which the synthesis of these enzymes is regulated is called repression.

The Tryptophan operon is repressible.

Some operons (e.g., lac and ara) are not expressed when glucose is present in the medium. These operons require cAMP for their expression.

(1) Glucose causes cAMP levels in the cells to decrease.

binding of RNA polymerase to the promoter.

The lac operon exhibits catabolite repression.In the presence of lactose and the absence of glucose, the lac repressor is inactivated, and the high levels of cAMP facilitate the binding of RNA polymerase to the promoter. The operon is transcribed, and the proteins that allow the cells to utilize lactose are produced.

The trp operon, as well as other amino acid biosynthetic operons, is regulated by attenuation.

1 thought on “Regulation of protein synthesis in Prokaryotes”