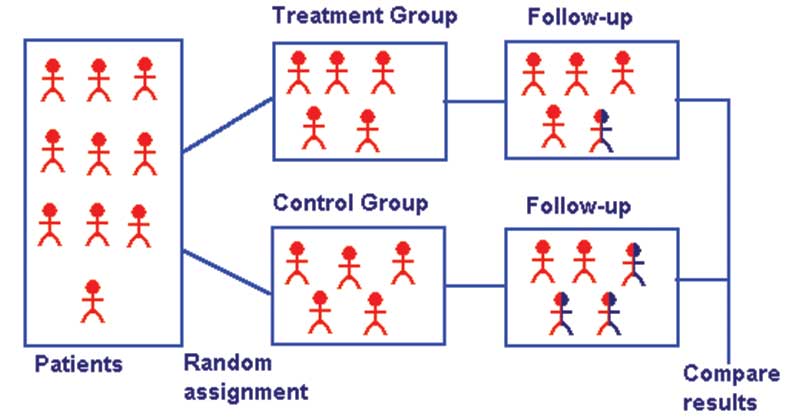 The basic steps in conducting an RCT include the following:

(a) Reference or target population:

(b) Experimental or study population:

The participants or volunteers must fulfill the following three criteria:

The final step is the assessment of the outcome of the trial in terms of:

(a) Positive results: that is, benefits of the experimental measures such as reduced incidence or severity of the disease, cost to the health service or other appropriate outcomes in the study and control groups.

(b) Negative results: that is, severity and frequency of side-effects and complications, if any, including death. Adverse effects may be missed if they are not sought.

Bias may arise from errors of assessment of the outcome due to the human element. These may be from three sources:

In order to reduce these problems, a technique known as “blinding” is adopted, which will ensure that the outcome is assessed objectively.

Blinding can be done in three ways:

(a) SINGLE BLIND TRIAL: The trial is so planned that the participant is not aware whether he belongs to the study group or control group.

(B) DOUBLE-BLIND TRIAL: The trial is so planned that neither the doctor nor the participant is aware of the group allocation and the treatment received.

(C) TRIPLE BLIND TRIAL: This goes one step further. The participant, the investigator and the person analyzing the data are all “blind”.

Ideally, of course, triple blinding should be used; but the double-blinding is the most frequently used method when a blind trial is conducted.