There are two pathways of synthesis of purine nucleotides:

The De novo synthesis of Purine 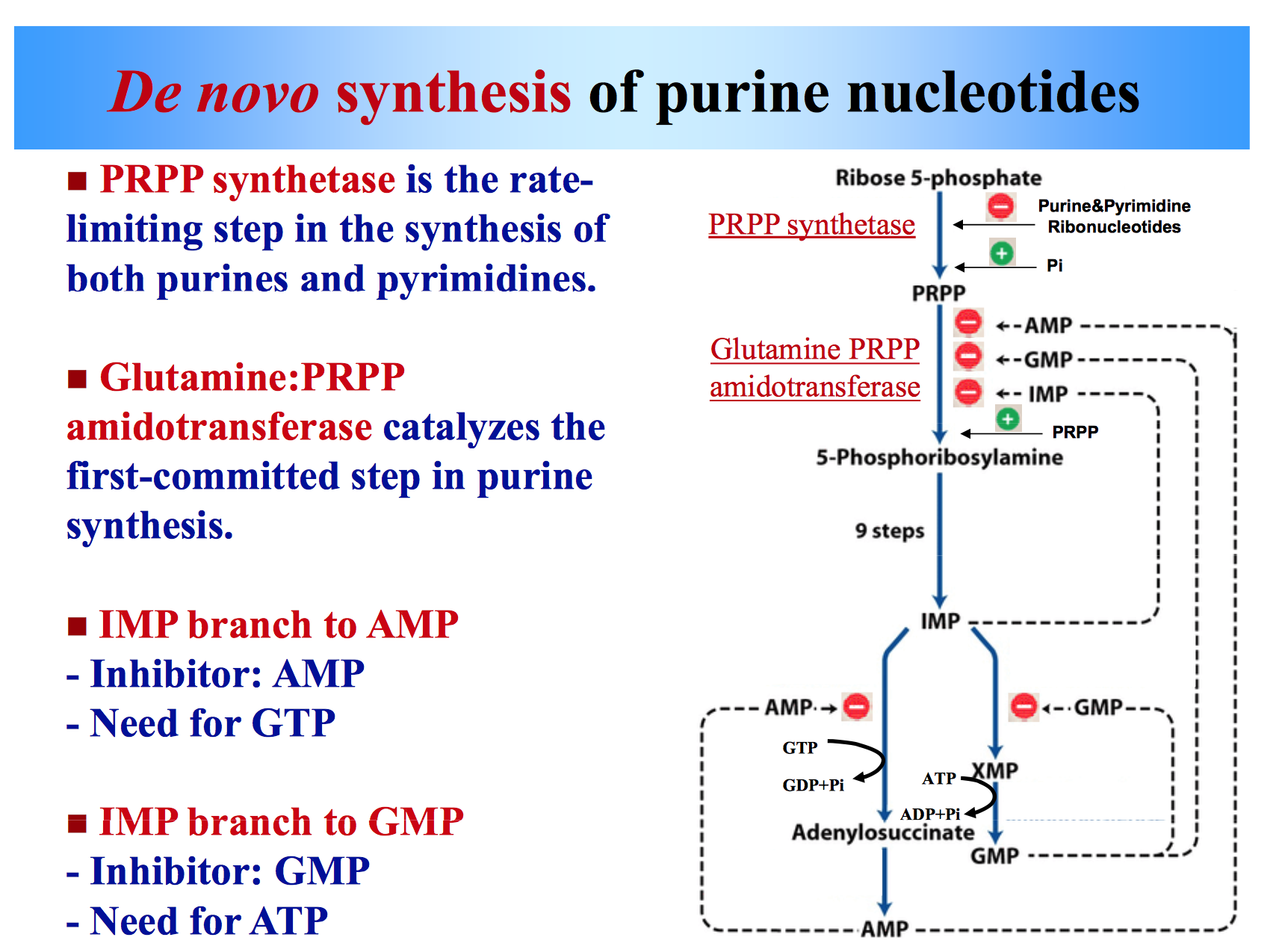 Overview of the pathway

Reactions of the pathway

(1) The purine base is synthesized on the ribose moiety.

(a) 5′-Phosphoribosyl 1′-pyrophosphate (PRPP), which provides the ribose moiety, reacts with glutamine to form phosphoribosylamine. This first step in purine biosynthesis produces N9 of the purine ring and is inhibited by AMP and GMP.

(b) The entire glycine molecule is added to the growing purine precursor. Then C8 is added by formyl-FH4, N3 by glutamine, C6 by CO2, N1 by aspartate, and C2 by formyl-FH4.

(c) IMP, which contains the base hypoxanthine, is generated. IMP is cleaved in the liver. Its free base, or nucleoside, travels to various tissues where it is reconverted to the nucleotide.

(2) IMP is the precursor of both AMP and GMP.

(a) Each product, by feedback inhibition, regulates its own synthesis from the IMP branch point as well as inhibits the initial step in the pathway.

(b) AMP and GMP can be phosphorylated to the triphosphate level.

(c) The nucleotide triphosphates (ATP and GTP) can be used for energy-requiring processes or for RNA synthesis.

(3) The reduction of the ribose moiety to deoxyribose occurs at the diphosphate level and is catalyzed by ribonucleotide reductase, which requires the protein thioredoxin.

(a) After the diphosphates are phosphorylated, dATP and dGTP can be used for DNA synthesis.

(4) Purine bases can be salvaged and converted between free bases, nucleotides, and nucleosides by a series of reactions.

A salvage pathway is a pathway in which nucleotides are synthesized from intermediates in the degradative pathway for nucleotides. 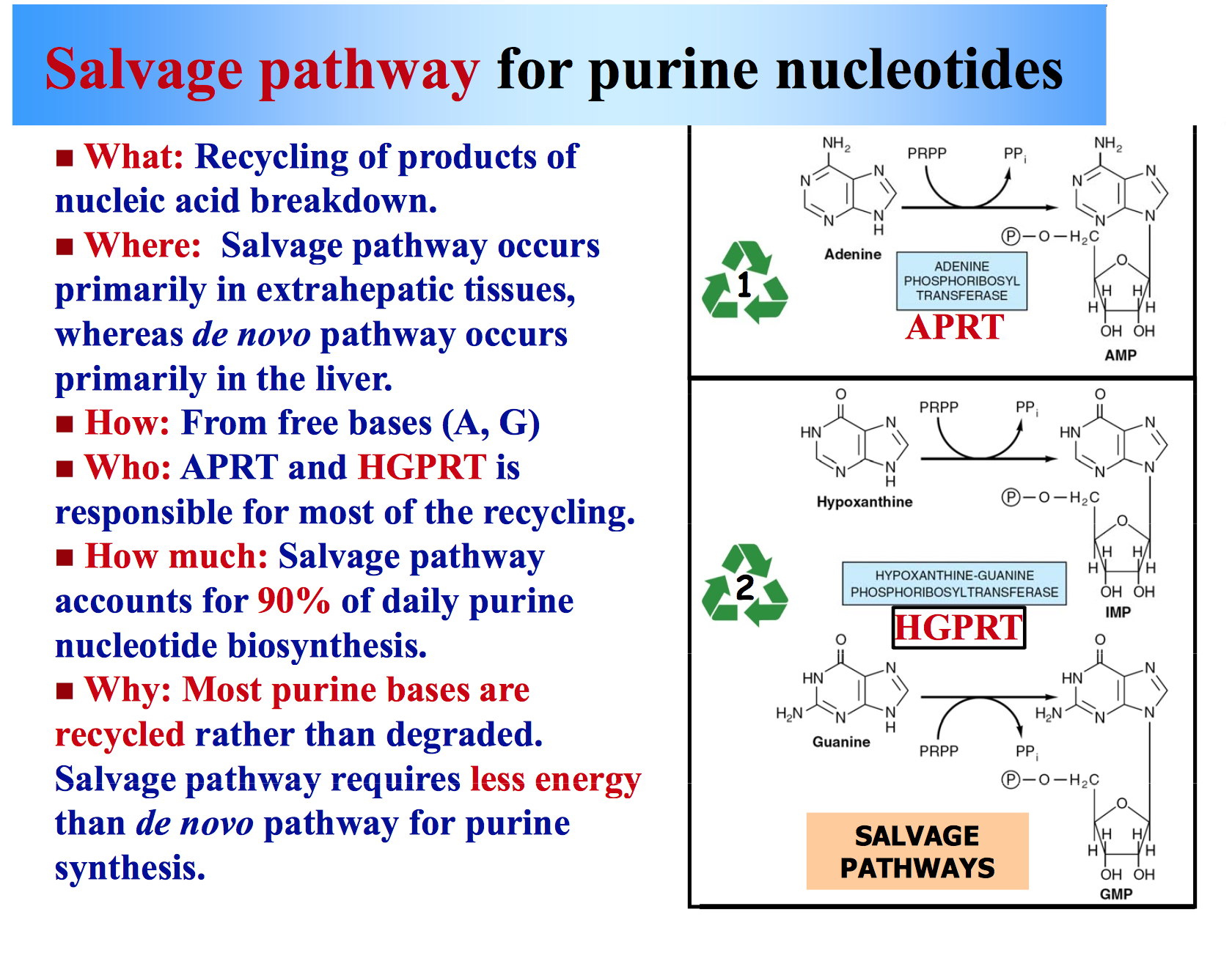 Purine synthesis via the salvage pathways occurs in all tissues. It is especially important in the brain and the bone marrow.

Overview of the Pathway

Deficiency of HGPRT leads to Lesch-Nyhan syndrome, which is characterized by self-mutilation and CNS deterioration. 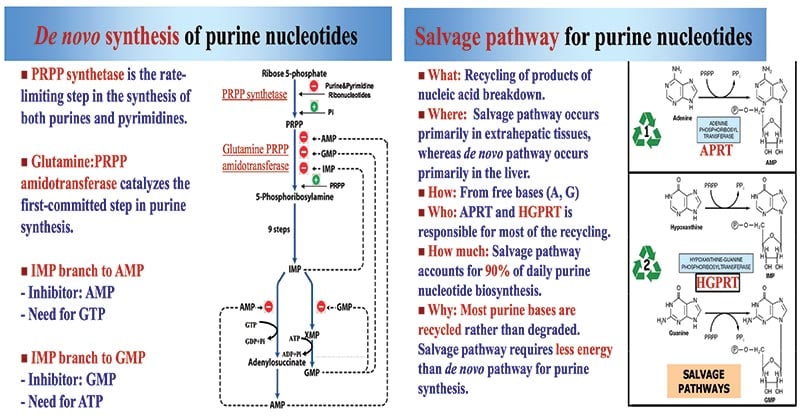