Double diffusion in one dimension

It is more commonly known as Ouchterlony double diffusion or passive double immunodiffusion. In this method, both the antigen and antibody diffuse independently through agar gel in two dimensions, horizontally and vertically.

The Ouchterlony double immunodiffusion test may be carried out with one or more of the following objectives:

In the test, an antigen solution or a sample extract of interest is placed in wells bore on gel plates while sera or purified antibodies are placed in other remaining wells (Mostly, an antibody well is placed centrally). On incubation, both the antigens in the solution and the antibodies each diffuse out of their respective wells. In case of the antibodies recognizing the antigens, they interact together to form visible immune complexes which precipitate in the gel to give a thin white line (precipitin line) indicating a reaction.

In case multiple wells are filled with different antigen mixtures and antibodies, the precipitate developed between two specific wells indicate the corresponding pair of antigen-antibodies. 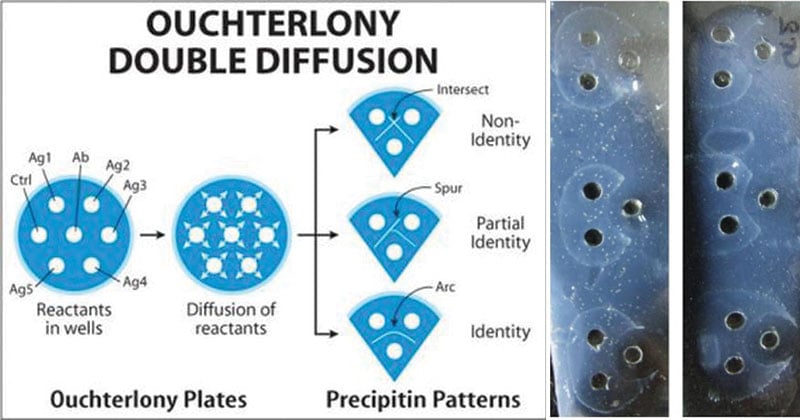