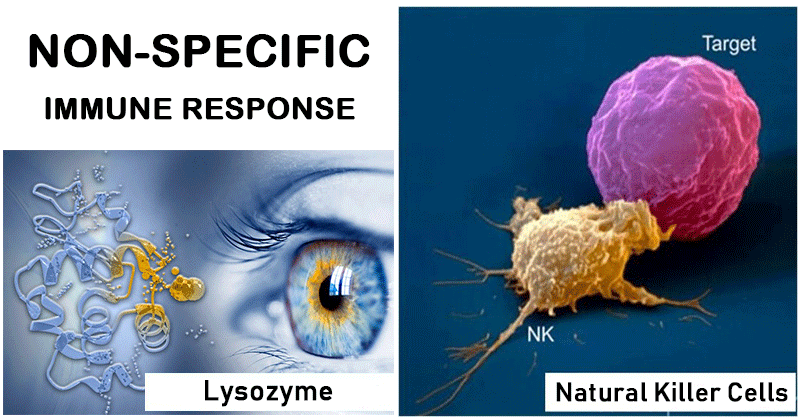 They exist at the body surfaces and within the body and consist of the skin and mucous membranes.  They act as mechanical barriers preventing the entry of microorganisms into the body. For example intact skin prevents the introduction of pathogens due to the keratin present in addition to other acidic skin secretions such as sebum. Similarly, mucous membranes that form a large part of outer covering of gastrointestinal, respiratory, genitourinary tracts secrete mucus that forms an effective barrier, trapping pathogens.

Physiological barriers such as gastric acidity rendering a low pH in the stomach, lysozyme found in tears, saliva, sweat and tissue fluid dissolving cell walls of many bacteria, ear wax or cerumen trapping dust particles are effective means of elimination of pathogens.

They consist of phagocytic cells and natural killer cells. Phagocytes such as neutrophils, macrophages, dendritic cells present in blood, fluid or tissues of the body constitute the front line of internal defence of the host, capturing and engulfing foreign particles by the effective process of phagocytosis. Natural killer cells on the other hand act as the first line of surveillance against tumor cells and virus infected cells.

Complements are a group of non-specific serum proteins that augment the functions of immune system. They play essential role in resistance against infection by activating a sequential cascade of active proteins that lyse foreign cells and also are the principle mediators of inflammatory response.

Besides complements, other proteins such as the acute phase proteins (such as C reactive protein) coat the surface of bacteria and lead to enhanced phagocytosis.

The fever response is a hallmark of infection and inflammatory disease executed by pyrogens especially pyrogenic cytokines and confers a survival benefit during infection. The main advantages of fever response include the inhibition of microbial multiplication and increase in the metabolic rate of the body.

Inflammation is triggered whenever body tissues are injured. It is characterized by redness, heat, swelling and pain. It prevents the spread of damaging agents, disposes cell debris and sets the stage for tissue repair.

They are small glycoproteins produced in response to viral infections which as a result interferes with viral replication. They play the primary protective role against naturally acquired viral infections.