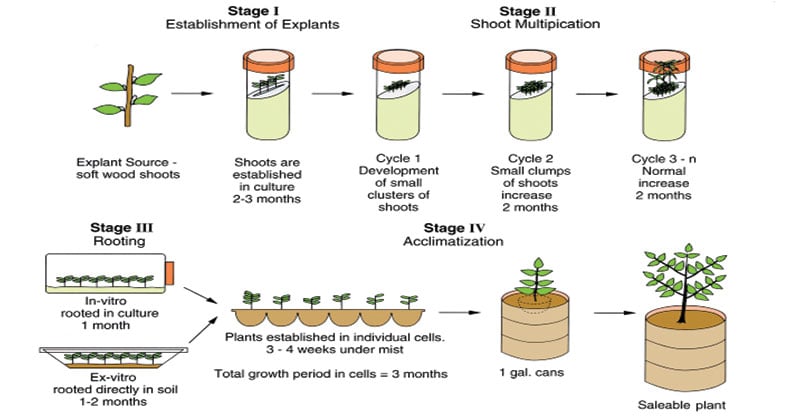 Micropropagation is a complicated process and mainly involves 3 stages (I, II, and III). Some authors add two more stages (stage 0 and IV) for a more comprehensive representation of micropropagation.

This is the initial step in micropropagation and involves the selection and growth of stock plants for about 3 months under controlled conditions.

In this stage, the initiation and establishment of a culture in a suitable medium are achieved. The selection of appropriate explants is important. The most commonly used explants are organs, shoot tips and axillary buds. The chosen explant is surface sterilized and washed before use.

It is in this stage, the major activity of micropropagation occurs in a defined culture medium. Stage II mainly involves the multiplication of shoots or rapid embryo formation from the explant. A growth chamber set at 20–24 °C is used, with a 2000- to 4000-lux light intensity, and a lighting period of 16 hours or so.

This stage involves the transfer of shoots to a medium for rapid development into roots. Sometimes, the shoots are directly planted in soil to develop roots. In vitro rooting of shoots is preferred while simultaneously handling a large number of species.

This stage involves the establishment of plantlets in soil. This is done by transferring the plantlets of stage III from the laboratory to the environment of the greenhouse. For some plant species, stage III is skipped, and un-rooted stage II shoots are planted in pots or in the suitable compost mix

Applications and Advantages of Micropropagation