Alexander Fleming in September 1928 accidentally discovered Penicillin. He found that the fungus, Penicillium notatum prevented the growth of bacteria, Staphylococcus spp.. Later Clutterbuck and his colleagues in 1932 studied the nature of Penicillin and found it as an organic acid that dissolves into the organic solvent at low PH. Chain et al in 1940 cultured fungus and extracted powdered form of Penicillin. Later, at the time of the second world war, Penicillin production was done and an adequate amount was produced to treat wounded people. P. notatum gave poor results so, other species of Penicillium were tested. As compared, P. chrysogenum NRRL 1951 gave good results which were induced by UV and other mutagenic chemicals. These selected strains produced a huge amount of Penicillin and inhibit the growth of the Oxford strain of Staphylococcus aureus. Czapek-Dox broth was used for the culture of P. notatum. Later, casein, beef extract were added for the better yield of penicillin which will be an aid in production. In 1949 chemically produced mediums like phenylacetic acid ethyl amine etc by maintaining the PH and addition of buffering agents like Calcium carbonate and also maintain the temperature.

The structure of Penicillin includes a 4-membered β-lactam ring and thiazolidine ring. Β-lactam ring contains an amide bond that is broken in an acidic and alkaline medium and that bond is hydrolyzed by beta-lactamase which is synthesized by many bacteria. Naturally occurring penicillins have different structure which is separated by R groups. The basic structure attaches to the N-acyl group in the substituted amino group. Mainly, Penicillin is categorized as natural and semisynthetic. 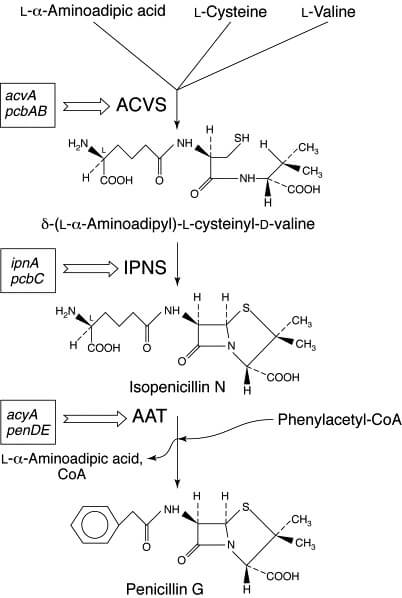 Penicillins yield is done commercially by using P.chrysogenum. Although the fungus was found earlier in 1928, these biosynthesis processes were concluded later. Penicillin biosynthesis is described into three main steps; catalytic step, oxidative, and exchange of different chains. 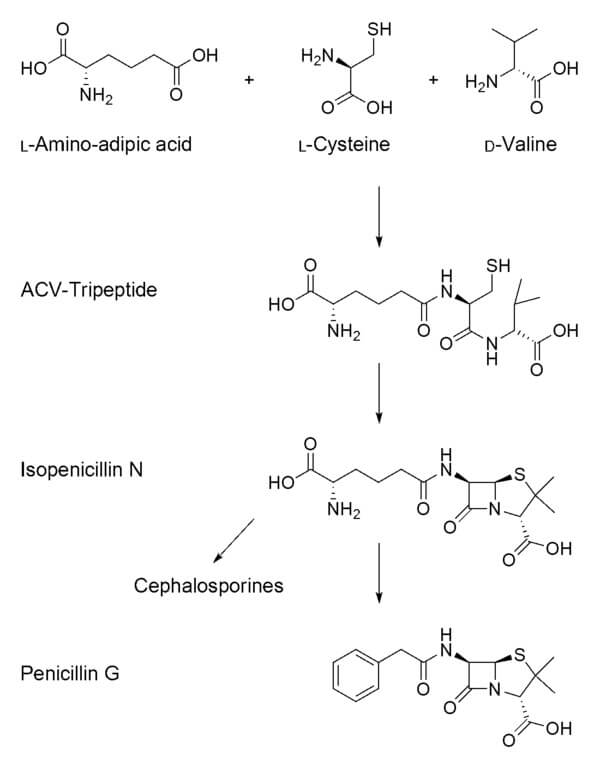 Penicillin production is done by fermentation process in a fermenter by agitating the culture of P.chrysogenum in a suitable condition. The whole process carried out is aerobic and the method involved is fed-batch.

This fermentation process is of Penicillin G which involves the following steps: