The mononuclear phagocytic system consists of monocytes circulating in the blood and macrophages in the tissues. The monocyte is considered a leukocyte in transit through the blood, which becomes a macrophage when fixed in a tissue. Monocytes and macrophages as well as granulocytes are able to ingest particulate matter (microorganisms, cells, inert particles) and are said to have phagocytic functions. The phagocytic activity is greater in macrophages, particularly after activation by soluble mediators released during immune responses, than in monocytes.

Differentiation of monocyte into a tissue macrophage involves a number of changes as follows: 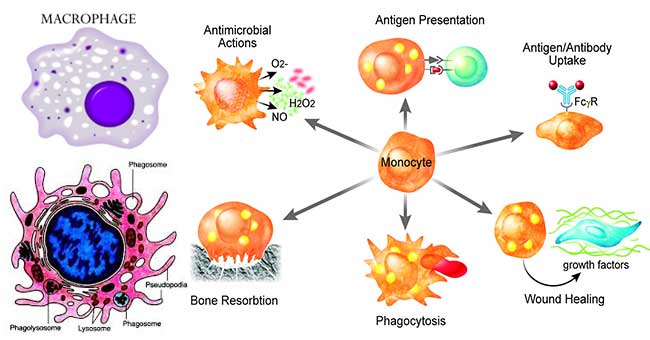 Macrophage-like cells serve different functions in different tissues and are named according to their tissue location.

For their participation in the immune reaction, the macrophages need to be stimulated and reach an “activated state.” Macrophages can be activated by various cytokines, components of the bacterial cell wall, and mediators of the inflammatory response. Gamma interferon produced by helper T cells is a potent activator of macrophages and is secreted by various cells in response to appropriate stimuli. Bacterial lipopolysaccharides (endotoxin), bacterial peptidoglycan, and bacterial DNA are the substances that also activate macrophages.

Activated macrophages are more potent than normal macrophages in many ways, such as having greater phagocytic ability and increased ability to kill ingested microbes. They are better APCs, and they activate T-cell response in a more effective manner. By secreting various cytotoxic proteins, they help in eliminating a broad range of pathogens, including virus-infected cells, tumor cells, and intracellular bacteria.

A major function of macrophages in host defense is to ingest and kill microbes. The mechanisms of killing include the enzymatic generation of reactive oxygen and nitrogen species that are toxic to microbes, and proteolytic digestion. Phagocytosis of bacteria, viruses, and other foreign particles is the most important function of macrophages. The macrophages on their cell surfaces have Fc receptors that interact with Fc component of the IgG, thereby facilitating ingestion of the opsonized organisms. They also have receptors for C3b, another important opsonin. After ingestion, the phagosome containing the microbe fuses with a lysosome. The microbe within the phagolysosome is killed by reactive oxygen, reactive nitrogen compounds, and lysosomal enzymes.

Macrophages serve as APCs that display antigens and activate T lymphocytes. This function is important in the effector phase of T cell–mediated immune responses. After ingestion and degradation of foreign materials, the fragments of antigen are presented on the macrophage cell surface in conjunction with class II MHC proteins for interaction with the TCR of CD4+ helper T cells. Degradation of the foreign protein is stopped following the association of antigen with the class II MHC proteins in the cytoplasm. This is followed by transportation of the complex to the cell surface by transporter proteins.

Macrophages produce several cytokines including the IL-1, TNF, and IL8. IL-1 plays an important role in the activation of helper T cells, while TNF plays as important mediator in inflammatory reactions. IL-8 attracts neutrophils and T cells to the site of infection. Activated macrophages secrete several different cytokines that act on endothelial cells lining blood vessels to enhance the recruitment of more monocytes and other leukocytes from the blood into sites of infections, thereby amplifying the protective response against the microbes.

In addition to ingesting microbes, macrophages also ingest dead host cells, including cells that die in tissues because of trauma or interrupted blood supply and neutrophils that accumulate at sites of infection. This is part of the cleaning up process after infection or sterile tissue injury. Macrophages also recognize and engulf apoptotic cells before the dead cells can release their contents and induce inflammatory responses. Throughout the life of an individual, unwanted cells die by apoptosis as part of many physiologic processes and the dead cells are eliminated by macrophages.

Macrophages promote the repair of damaged tissues by stimulating new blood vessel growth (angiogenesis) and synthesis of collagen-rich extracellular matrix (fibrosis). These functions are mediated by cytokines secreted by the macrophages that act on various tissue cells.

1 thought on “Macrophages- Introductions and Functions”