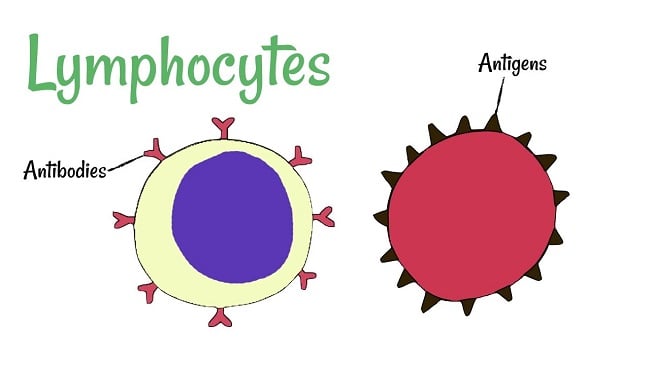 Lymphocytes are the principal cell in the adaptive immune response. They represent 20% to 40% of circulating white blood cells and 99% of cells in the lymph.   The total number of lymphocytes in a healthy adult is about 5 × 1011. Of these, about 2% are in the blood, 4% in the skin, 10% in the bone marrow, 15% in the mucosal lymphoid tissues of the gastrointestinal and respiratory tracts, and 65% in lymphoid organs (mainly the spleen and lymph nodes).

Lymphocytes consist of distinct subsets that are different in their functions and protein products. Lymphocytes can be broadly subdivided into three major populations on the basis of functional and phenotypic differences: B lymphocytes (B cells), T lymphocytes (T cells), and natural killer (NK) cells. In humans, approximately a trillion (1012) lymphocytes circulate continuously through the blood and lymph and migrate into the tissue spaces and lymphoid organs.

Subsets of B and T lymphocytes

They exist with distinct phenotypic and functional characteristics. The major subsets of B cells are follicular B cells, marginal zone B cells, and B-1 cells, each of which is found in distinct anatomic locations within lymphoid tissues.  The two major T cell subsets are CD4+ helper T lymphocytes and CD8+ CTLs, which express antigen receptors called αβ T cell receptors (TCRs), and function as the mediators of cellular immunity. CD4+ regulatory T cells are a third subset of T cells expressing αβ receptors; their function is to inhibit immune responses.

Natural killer (NK) cells are lymphoid cells that are closely related to B and T cells. However, they do not express antigen-specific receptors and are considered part of the innate immune system.

Lymphocytes play a major role in both cellular and adaptive immunity.

Humoral immunity involves the production of antibodies (immunoglobulins), and is brought about by lymphocytes, which are called B-cells. After B-cells are stimulated by an antigen, they proliferate and transform into plasma cells, which produce specific antibodies.