Milk is an excellent medium for the growth of microorganisms because it contains the milk protein casein, the sugar lactose, vitamins, minerals and water. Litmus, a pH indicator is incorporated in the medium for the detection of production of acid or alkali and oxidation- reduction activities. Fermentation of lactose of milk with the production of lactic acid is demonstrated when the litmus turns from blue to pink as a result of acid production. The accumulation of acid acts on casein, resulting in formation of clot due to the precipitation of casein as calcium caseinate. With some organisms, the curd shrinks and whey is formed at the surface. Acid curd is identified by the clot which remains immobile when the tube is inverted. Some bacteria produce rennin enzyme that act on casein and in presence of calcium ions forms paracaseinate that is insoluble and is called rennet curd. Unlike acid curd it is semisolid clot that will flow slowly on tilting the tube. Some bacteria possess proteolytic enzyme caseinase and  hydrolyze casein. Casein hydrolysis results in the release of large quantities of ammonia that makes the medium alkaline with foul smell, the litmus turns into a purplish blue. With further incubation, an opaque clearing of milk occurs as the casein is hydrolyzed to peptides and amino acids. The opaque liquid supernatant which is whey like appearance turns brown in color. Additionally, some organisms reduce litmus, in which case the medium becomes colorless in the bottom of the tube. 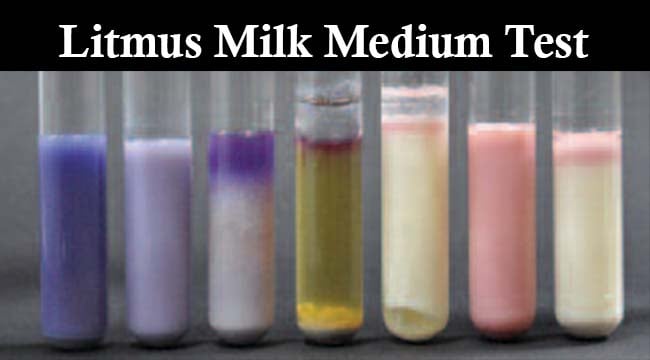 Litmus media reactions are not specific and should be followed up with additional tests for definitive identification of microorganisms.