Antigens are specifically defined as molecules that interact specifically with immunoglobulin receptor of B-cell (or T-cell when complexed with MHC) or antigen is any substance that may be specifically bound by an antibody molecule or T cell receptor. Antigen is a substance which when introduced into living animal evokes specific immune response either by producing specific antibody or by sensitized T-cell. Antigen may be soluble substance, toxin or substance present in bacteria, virus, RBC and other types of cell. 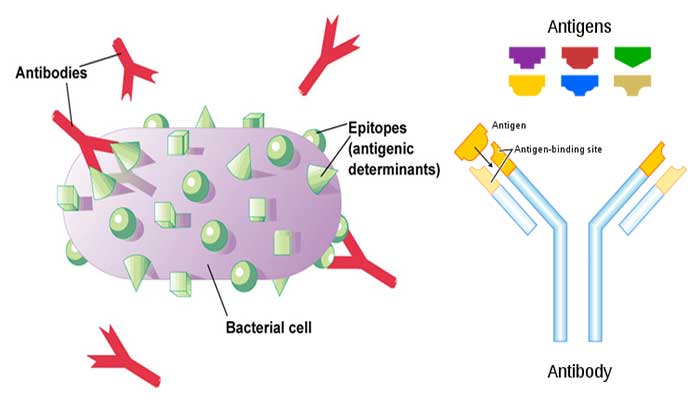 It is a substance usually protein in nature and sometimes polysaccharide, that generates a specific immune response and induces the formation of a specific antibody or specially sensitized T cells or both. Antigens are “targeted” by antibodies.

An antigen may be a substance from the environment, such as chemicals, bacteria, viruses, or pollen or may also be from inside the body. In general, two main divisions of antigens are recognized: foreign antigens (or hetero-antigens) and autoantigens (or self-antigens).

It originates from outside the body. Examples include parts of or substances produced by viruses or microorganisms (such as bacteria and protozoa), as well as substances in snake venom, certain proteins in foods, and components of serum and red blood cells from other individuals.

It originates within the body. Normally, the body is able to distinguish self from non-self, but in persons with autoimmune disorders, normal bodily substances provoke an immune response, leading to the generation of autoantibodies. Ribonucleoprotein antigens in lupus-related diseases and mitochondrial antigens in primary biliary cirrhosis (PBC) etc. are examples of autoantigens.

Antibody binds to only a portion of the antigen, which is called a determinant or an epitope. Epitope is immunologically active regions of an immunogen (or antigen) that binds to antigen-specific membrane receptors on lymphocytes or to secreted antibodies. It is also called antigenic determinants. The small area of chemical grouping on antigen molecule which determines specific immune response and reacts specifically with antibody is known as epitope.

Antigens typically contain multiple determinants, some of which may be repeated and each of which can be bound by an antibody. The presence of multiple identical determinants in an antigen is referred to as polyvalency or multivalency.

It is defined as the property of a substance (immunogen) that endows it with the capacity to provoke a specific immune response. Immunogenecity is the ability to induce a humoral/ cell-mediated immune response.

It is defined as the property of a substance (antigen) that allows it to react with the products of a specific immune response (antibody or Tcell receptor). Antigenecity is the ability to combine specifically with the final products (Antibodies or receptors in T-Cell) of humoral /cell mediated immune response.

Thus, all immunogens are antigens; but all antigens are not immunogens.