Prokaryotic cells almost always are bounded by a fairly rigid and chemically complex structure present between the cell membrane and capsule/slime layer called the cell wall. Peptidoglycan is the main component of the cell wall and is responsible for the shape and strength of the cell. It is a disaccharide and contains two sugar derivatives—N-acetylglucosamine and N-acetylmuramic acid—joined together by short peptide chains. N-acetylmuramic acid carries a tetrapeptide side chain consisting of D- and L-amino acids (D-glutamic acid and L-alanine) with mesodiaminopimelic acid (Gram-negative bacteria) or L-lysine (Gram-positive bacteria). Tetrapeptide side chains are interconnected by pentaglycine bridges. Most Gram-negative cell walls lack interpeptide bridge. Cell wall provides shape to the cell and protects bacteria from changes inosmotic pressure, which within the bacteria cell measures 5–20 atmospheres. 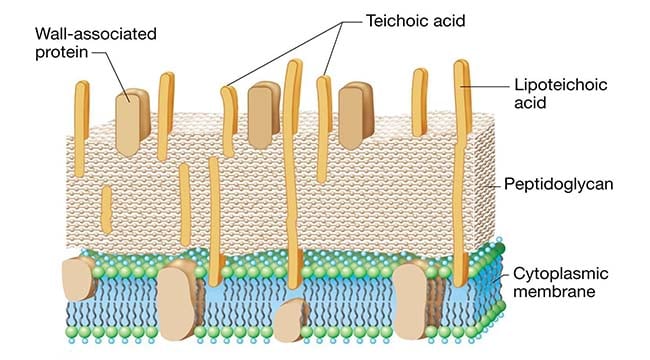 Teichoic acids are polymers of polyribitol phosphate or polyglycerol phosphate containing ribitol and glycerol. These polymers may have sugar or amino acid substitutes, either as side chain or within the chain of polymer. Teichoic acids are of two types—wall teichoic acid (WTA) and lipoteichoic acids (LTA). They are connected to the peptidoglycan by a covalent bond with the six hydroxyl of N-acetylmuramic acid in the WTA and to plasma membrane lipids in LTA.

Teichoic acids have many functions: