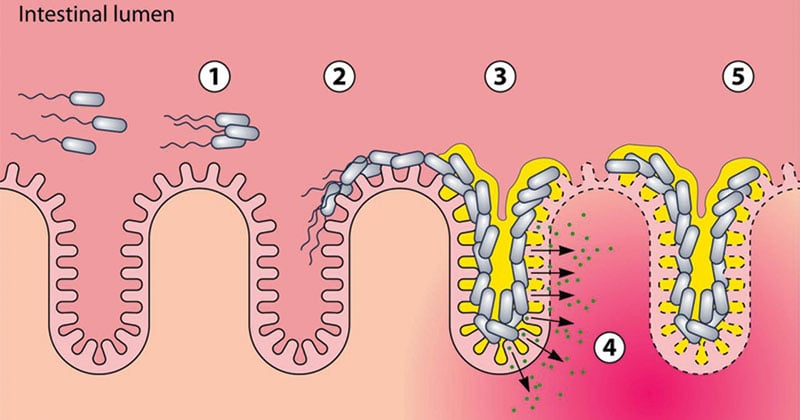 Figure: Stages of pathogenesis of EAEC. Numbers in circles show the progression of EAEC pathogenesis. (1) Agglutination of planktonic EAEC bacteria. (2) Adherence to the intestinal epithelium and colonization of the gut. (3) Formation of biofilm. (4) Release of bacterial toxins, inducing damage to the epithelium and increased secretion. (5) Establishment of additional biofilm. Source: DOI: 10.1128/CMR.00112-13

These are one of the few bacteria associated with chronic diarrhea and growth retardation in children.

Risk Groups and Source of Infection

Contaminated food appears to be the main source of EAEC infection and has been implicated in several foodborne outbreaks of diarrhea.

Contamination of food and water plays a central role in transmission.

The pathogenesis of EAEC infection is not well understood. However, a three-stage model based on in vitro and animal is widely accepted.

It is tempting to speculate that malnourished hosts may be particularly impaired in their ability to repair this damage, leading to the persistent-diarrhea syndrome.

Disease is characterized by:

This process can be either acute or progress to a persistent diarrhea, particularly in children and HIV-infected patients.

EAEC infection is diagnosed definitively by the isolation of E. coli from the stools of patients and the demonstration of the AA pattern in the HEp-2 assay.

HEp-2 assay. The HEp-2 assay remains the gold standard for detection of EAEC. Although variations in the AA pattern can be discerned, the presence of bacterial clusters in a stacked-brick configuration should be used to identify EAEC strains.

DNA probe. Several lines of evidence suggest that the large plasmids present in most EAEC strains have a high degree of DNA homology.   The nucleotide sequence of the AA probe represents a cryptic open reading frame which is adjacent to the plasmid replicon. A PCR assay with primers derived from the AA probe sequence can be used for the detection of the desired sequence.

Other tests for EAEC.